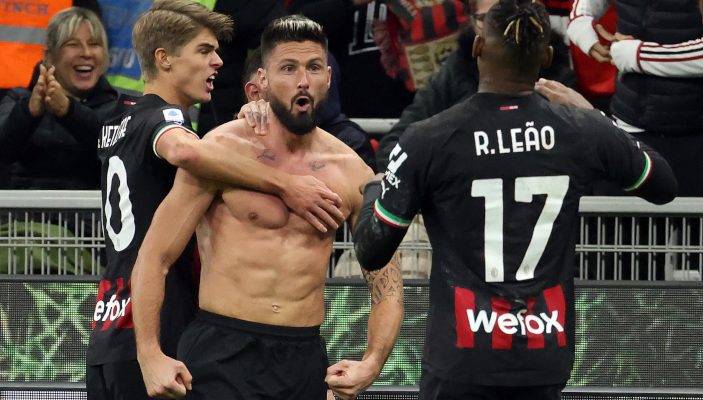 Olivier Giroud admits he simply had to celebrate that spectacular winning goal for Milan, even if it got him sent off. ‘Inside my head, I am still a little kid!’

The veteran scored a stunning flying volley at the back post on Sandro Tonali’s cross to give the Rossoneri victory at the final minute against Spezia at San Siro, after Theo Hernandez and Daniel Maldini were on target.

However, his celebrations were cut short, as after whipping his shirt off, he realised he’d already been booked and was promptly sent off for a second yellow card.

“It was a good goal and a fine pass from Sandro, we wanted to win this match, we were fired up to the end. The most important thing is that tomorrow we have an extra three points, but I am a bit angry because I am suspended,” Giroud told Sky Sport Italia.

“This game reminded me of last season when there was a mistake. At least this time we won it, we believed to the end of the match and are happy.”

Had the France international simply forgotten that he was already on a yellow card?

“Perhaps I am just struggling to answer right now as I am angry with myself, I’ll feel better in an hour or so. I was furious with myself, but I tried to shut up. I did my job, I put the ball in the back of the net.

“Football is like that, with the adrenaline and joy of giving victory to my team, after a difficult game, in my head I am still a little kid! I had to celebrate.”

His scoring rate for Milan has seen Giroud earn a place at the World Cup in Qatar for France, netting nine goals and providing four assists in 17 competitive games.

“I don’t know if it’s the best moment of my career, but there are moments when you are in the right place at the right time, then I try to do what I know how to do, my life is in the penalty area. I didn’t score for five games a couple of weeks ago, I was a bit frustrated, but I always tried to keep my confidence and work hard in training.”

Considering he is 36 and in the form of his life, how long will Giroud keep playing?

“I don’t know, whenever my body tells me that is enough.”