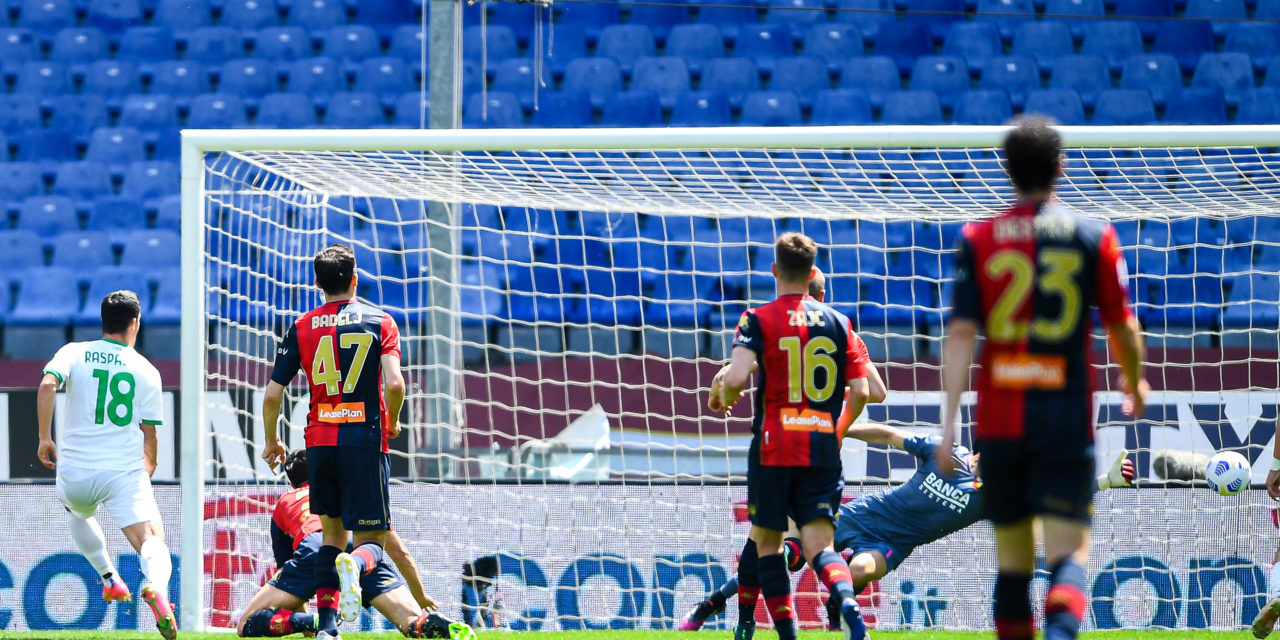 Sassuolo continue their push for seventh place with Giacomo Raspadori and Domenico Berardi goals, as Davide Zappacosta’s screamer was too late for Genoa.

The Grifone weren’t entirely safe from the threat of relegation yet and were missing Kevin Strootman, Davide Biraschi, Domenico Criscito and Luca Pellegrini. Marlon sat out a ban for Sassuolo, with Filippo Romagna and Jeremie Boga injured and Francesco Caputo returning to the bench after a long lay-off.

Mattia Perin had to make a save in the opening minutes to prevent a Cristian Zapata own goal, then the defender forced a save at the other end too with his scorcher from distance.

Sassuolo took the lead when Vlad Chiriches robbed Miha Zajc in midfield and Hamed Traore immediately set up Giacomo Raspadori to drill into the near bottom corner from the edge of the box.

Perin got down quickly to fingertip a Domenico Berardi effort round the base of the upright. Genoa thought they’d equalised on the half-hour when Mattia Destro tackled Manuel Locatelli to spark a counter, his cross then nodded in by Zajc. However, after viewing it again on the VAR monitor, the referee ruled Destro had fouled Locatelli.

Davide Zappacosta tested Andrea Consigli after shrugging off Jeremy Toljan, as did Berardi at the other end, but Genoa needed something more in attack and introduced Eldor Shomurodov.

Raspadori went on a rapid counter, but hesitated for a moment, allowing Perin to pluck the ball off his foot when one-on-one.

Moments later, Edoardo Goldaniga’s header from a corner looped up and bounced off the crossbar.

Sassuolo doubled their lead thanks to an absolute howler from Genoa veteran Andrea Masiello, whose clumsy back-pass was pounced upon by Berardi for 2-0.

Genoa finally did pull one back with a right-foot screamer from Davide Zappacosta into the far top corner from the edge of the penalty area.

This set up a tense finale with the Grifone pouring forward and Zappacosta almost completed the comeback with a brace, another powerful strike that this time skimmed the near post.