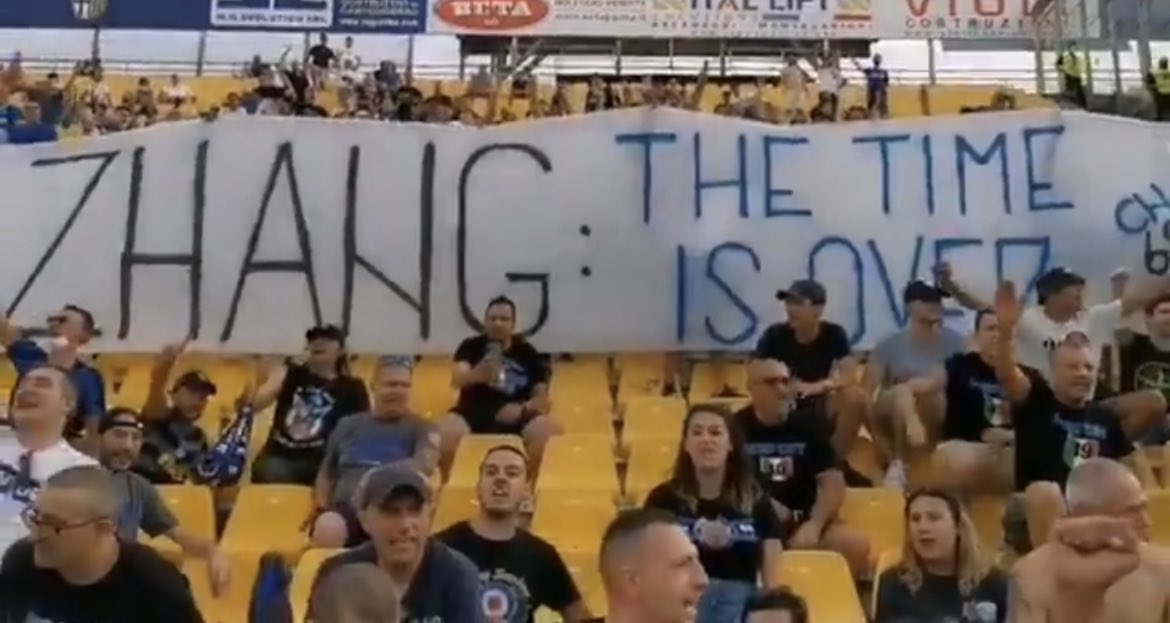 As expected, Inter’s pre-season friendly against Parma turned into an opportunity for the fans to insult their club owners over the Romelu Lukaku sale to Chelsea, even waving money at them.

The game was at the Stadio Tardini this evening and circa 500 supporters were in attendance.

Lukaku was not even on the bench, another sign that his €115m transfer to Chelsea is imminent, with reports he will have a medical tomorrow.

The ultras spent the entire game aiming abuse at President Steven Zhang and the Suning corporation who own the club, including a large banner that read: ‘Zhang if you want to save Inter, then you have to leave.’

Another read ‘Zhang, the time is over’ and there is film of the ultras waving €10 bills as they sang ‘You have to sell’ and ‘We’ll give you the money.’

Chants were repeatedly aimed at the patrons, singling out coach Simone Inzaghi and directors Beppe Marotta and Piero Ausilio for trying to do what was good for Inter.

It wasn’t just in the stadium either, because the game was streamed online, allowing the comments section to become a non-stop stream of insults towards the Zhang family.

The team that won the Scudetto in May has been dismantled, with coach Antonio Conte walking away, Achraf Hakimi sold to PSG and Lukaku seemingly ready for Chelsea.

Lautaro Martinez was in the starting XI for the match against Parma, despite the rumours from England that he is a target for Tottenham Hotspur.

As for the game itself, Inter won 2-0, as after Nicolò Barella thumped the upright, Marcelo Brozovic was ready to pounce on the rebound from a save on Lautaro Martinez.

Federico Dimarco created the second goal with a fine cross to the back post, where Matias Vecino bundled over the line from a yard, clattering into the woodwork.

Martin Satriano and Lautaro Martinez were both denied by good saves, but the fans also took their ire out on Arturo Vidal for a futile yellow card in the final minute.