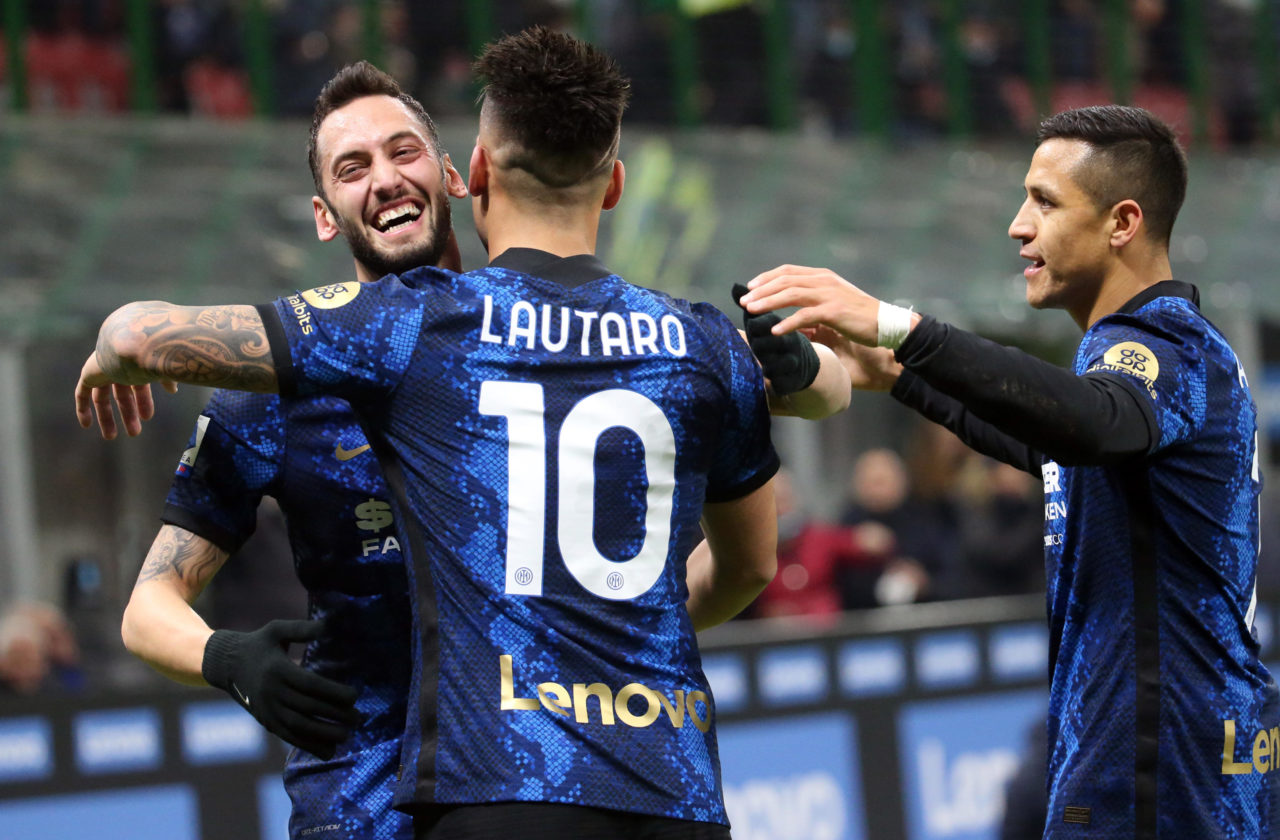 It was a dramatic December in Serie A as Inter were crowned winter champions and bottom of the table Salernitana were threatened with expulsion from the league.

Fiorentina’s Dusan Vlahovic set scoring records while Juventus recovered on the field but were investigated off it, Catania were declared bankrupt, and Sampdoria President Massimo Ferrero was jailed.

The Nerazzurri soared four points clear at the Serie A summit as their title rivals faltered to become Campione d’Inverno.

Simone Inzaghi guided Inter to five consecutive league victories in a flawless month to remember as Milan and Napoli could not keep pace.

Dutch defender Denzel Dumfries proved his worth and silenced the doubters by scoring three times in the winning streak, including the final goal in a mightily impressive 3-0 demolition of Roma at the Stadio Olimpico on December 4.

Turkish midfielder Hakan Çalhanoğlu was also on target against Jose Mourinho’s team and won plaudits for his improved displays after a barrage of early-season criticism following his move from rivals Milan.

The Rossoneri were left trailing in second place, four points off top spot after slipping to 1-1 stalemate at Udinese and losing in a pulsating showdown against Napoli at the San Siro.

Elif Elmas headed the only goal early on in a tense encounter on December 19 as Milan had a late equalizer from Frank Kessie controversially ruled out by VAR.

Decimated by injuries to key players, Napoli stumbled through the month, sustaining shock defeats to both Empoli and Spezia without stars Kalidou Koulibaly, Victor Osimhen, Lorenzo Insigne and Fabian Ruiz.

The Partenopei threw away a two goal lead to draw at Sassuolo and left empty-handed in a thrilling 3-2 reversal against Atalanta at the Stadio Diego Maradona. Napoli finished the first half of the campaign in third place, trailing Inter by seven points, while Atalanta were fourth, a further point behind after a mixed month in which they won at Hellas Verona but were stunned by Roma in a 4-1 loss at the Gewiss Stadium.

Meanwhile, Udinese sacked Luca Gotti after one win in 13 games at the start of the month and promoted his assistant Gabriele Cioffi to the position of caretaker head coach.

It was a grim month for bottom of the table Salernitana who were threatened with expulsion from Serie A.

Lazio owner Claudio Lotito had been expected to sell the Campania club in May, as it is against league rules for an individual or company to have ownership of two teams in the same division.

Despite a deadline extension, new owners were not found and Salernitana faced the prospect of being expelled from the top flight. However, the Neapolitan businessman Danilo Iervolino managed to save the Granata’s season minutes before the deadline, becoming the club’s new owner.

Irrespective of that, Salernitana will most likely be in Serie B at the very least next season. Stuck at the bottom of the table they lost every game in December, including four and five-goal thrashings at the hands of Fiorentina and Inter, and were barred from playing at Udinese after a Covid-19 outbreak at the club.

Juventus under investigation but bounce back on the field

The Bianconeri clawed their way back to fifth place in the standings but endured the indignity of an investigation from the Italian financial police for alleged false accounting.

Juve were unbeaten in December and, although not always convincing, gained wins against Genoa, Bologna and Cagliari, also drawing at Venezia.

It was enough for Massimiliano Allegri’s side to advance up the table. However, talismanic striker Paulo Dybala sustained yet another injury limping off against Venezia early on with a knee complaint.

The meteoric rise of Vlahovic

Dusan Vlahovic reached stratospheric new heights in the month of December, netting four times in as many games to lead the goalscoring charts with 16 for the season.

The Fiorentina forward’s relentless pursuit of the Capocannoniere crown continued as he struck away at Bologna, twice at home in a four-goal dismissal of Salernitana and in a 2-2 draw against Sassuolo at the Stadio Artemio Franchi.

The attacker turns 22 next month but has already equalled Cristiano Ronaldo’s total of 33 goals in a calendar year at the Viola.

Vlahovic is responsible for almost half of Fiorentina’s league goals this term (34) and played a crucial part in moving the Tuscan club up to seventh in the Serie A standings.

English Premier League sharks continue to hover around the prolific forward who turned down a lucrative offer that would have made him the highest-paid player in the Viola’s history.

President Rocco Commisso expressed his frustration with the constant speculation surrounding the young Serb, nevertheless, Vlahovic seems likely to leave Fiorentina for a record price in the summer.

Watch all Vlahovic’s 16 Serie A goals this season

The Sicilian club’s descent from Serie A to bankruptcy in just 15 years marked another low point in modern calcio history.

Facing an uncertain future in the third tier of Italian football it is worth remembering that Catania finished eighth in the top flight as recently as the 2012-2013 season.

The Rossazzurri spent eight seasons competing with the best in Italy and were managed by Walter Zenga, Sinisa Mihajlovic, Diego Simeone and Vincenzo Montella, among others.

Argentinian striker Papu Gomez launched his career at the club while iconic forward Giuseppe Mascara was capped by Italy after netting 60 goals in 238 games between 2003 to 2011.

Catania were demoted to Serie C following a match-fixing scandal in 2015 and never recovered in another depressing instance of impropriety in Italian football.

Remembering the recent glory days of Catania, from Simeone to Papu Gomez

After being arrested and jailed for alleged financial irregularities, flamboyant Sampdoria President Massimo Ferrero stepped down from his position at the Ligurian club.

Ferrero spent 17 days in prison following his arrest on December 6 and was accused of fraud, bankruptcy, and corporate crimes.

He immediately relinquished the presidency at Samp to end a controversial seven and a half year tenure in degrading fashion.