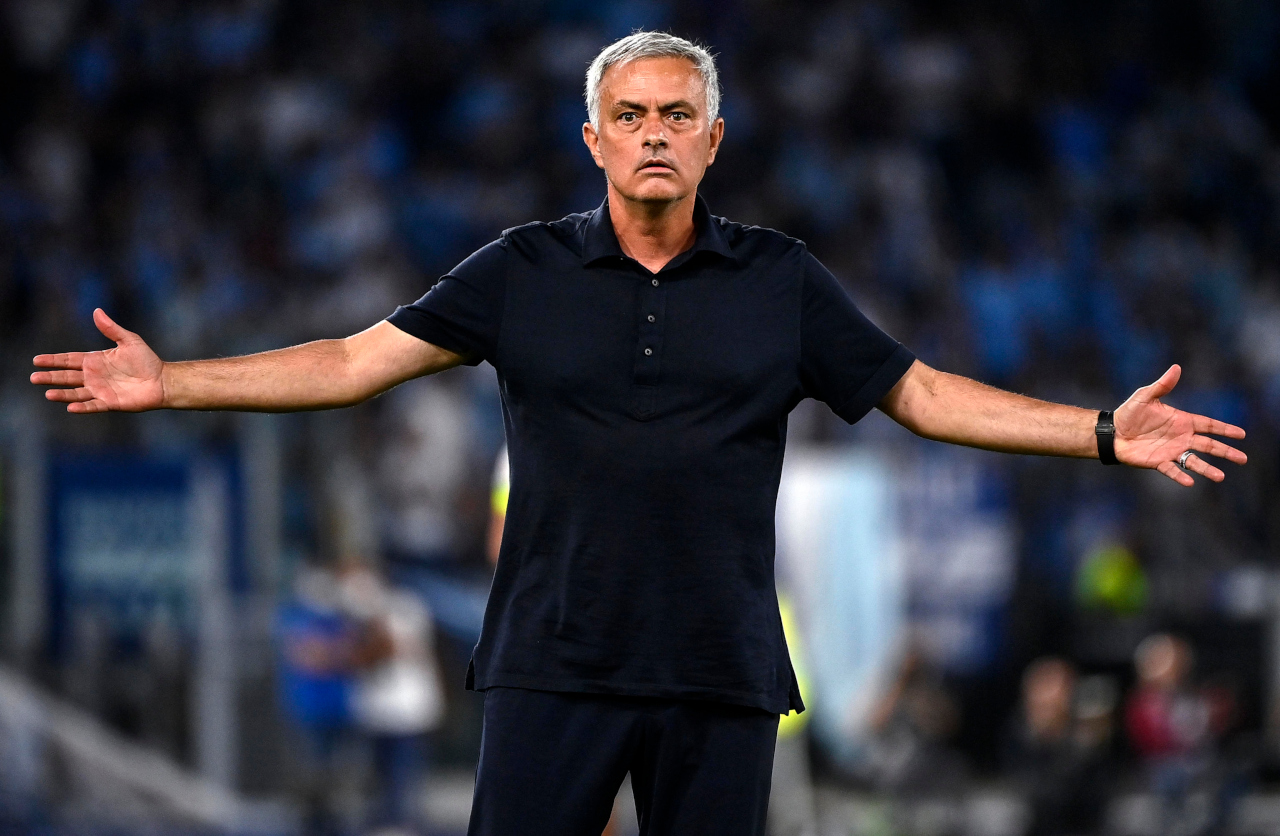 August and September saw the new season kick-off spectacularly as Napoli made the perfect start in Serie A, Juventus plummeted to the bottom of the table and Jose Mourinho ran away with the headlines, all while Gianluigi Donnarumma was left out at Paris Saint-Germain and two managers lost their jobs…

Napoli march to the top

Napoli soared to the Serie A summit with six consecutive victories all while playing a brand of offensive, aesthetically pleasing football. Even the most hopeful Azzurri fans could not have envisaged such a positive opening to the season under Luciano Spalletti.

The Spalletti surge has its foundations in a rock-solid defence, led by the majestic Kalidou Koulibaly. Every transfer window the Senegal central defender is a constant feature in the gossip columns, connected with moves to the Premier League, but the 30-year-old has always affirmed his love of the city and club while staying silent about the incessant speculation.

Koulibaly even scored twice – the same number of goals Napoli conceded in Serie A – with a scorching half-volley in the four-goal rout of Udinese, and a crucial late winner at home to Juventus.

The arrival of Andre-Frank Zambo Anguissa from Fulham failed to generate much excitement at the time, yet the strong running Cameroon midfielder has been a revelation, providing a rigid base as Fabian Ruiz and Piotr Zieliński dictate the tempo.

Up front Victor Osimhen plundered four goals, with two of the highest calibre in the Europa League as Napoli came back to salvage a deserved draw at Leicester City.

The Nigerian forward’s continued good health and goalscoring exploits will be key factors if Spalletti’s side are to remain above the chasing pack with both Inter and Milan in strong pursuit of the league leaders.

As worst case scenarios go it was a ghastly nightmare. Four games in, the mighty Old Lady of Italian football were in complete disarray as a disastrous start meant they languished in the relegation places, without a single victory.

Relinquishing a two-goal lead to pick up just a point at Udinese, stunned at home by dogged Empoli, beaten by Napoli and withstanding a second half fight-back to draw with Milan, it was an unexpectedly dreadful start to the new season.

Coach Massimiliano Allegri was forced to brush it off, even going so far as to joke that Juve’s game at minnows Spezia was a relegation clash.

At 2-1 down early in the second half at the Stadio Alberto Picco it was far from a laughing matter. Yet, inspired by Federico Chiesa, the Bianconeri pulled through and completed a 3-2 comeback win with goals from the brilliant Italy international winger and Dutch defender Matthijs De Ligt.

Juve finished September with a barely convincing 3-2 victory at home to Sampdoria, which catapulted the Bianconeri into the lofty heights of 10th in the table, but had a promising start to their Champions League campaign with back to back wins against Malmo and Chelsea.

It is doubtful Allegri was reconsidering his decision to return to the hot seat after the Turin giant’s catastrophic gamble with Andrea Pirlo at the helm last term. However, there is no way he could have foreseen such a disastrous beginning to the league campaign.

Missing the influence and goals of Cristiano Ronaldo and with question marks hanging over Wojciech Szczesny in goal, a ponderous midfield and stuttering attack, there was at least a glimmer of hope as Juve defeated Chelsea in the Champions League with Chiesa on target again. Leonardo Bonucci was at the heart of a defensive masterclass as Allegri gave scorer Chiesa a cheeky kick up the backside from the sidelines.

It did not get any easier though as Juventus had to face rivals Torino in the Derby della Mole days after playing Chelsea and then Roma, Inter and Sassuolo during the rest of October.

Mourinho embraces the passion of Roma

The special run, a full-time derby post-mortem on the pitch and pizza on the train – Jose Mourinho’s first months at Roma were far from dull.

The Portuguese embraced the challenge of coaching in the Eternal City with unbridled enthusiasm. Never one for understatement, he embarked on a euphoric charge from the dugout to celebrate Stephan El Shaarawy’s terrific late winner as Roma overcame Sassuolo 2-1 at the Stadio Olimpico in his 1,000th game as a coach.

Mourinho talked about the ‘crazy, incredible passion’ of the Giallorossi tifosi and his sprint towards the Curva Sud to join in the celebrations backed up the emotional declarations.

Everything was running smoothly as the 58-year-old showed his love of Italian food when eating a pizza on the train following a four-goal demolition of Salernitana. Yet the wheels came off spectacularly as Hellas Verona inflicted a first defeat of the season in a wildly entertaining five-goal encounter at the Stadio Bentegodi.

The Derby della Capitale was another thrilling spectacle of attacking football as Lazio prevailed 3-2 and Mourinho held a bizarre on the field team talk after the final whistle.

There is surely more drama to come as Roma take on Juventus, Napoli, and Milan in what could be a season defining October for Mourinho’s side.

From European Champion to bench warmer. Italy’s No 1 could hardly have imagined he would spend more time as a spectator than on the pitch following his controversial, high-profile move to Paris Saint-Germain.

The 22-year-old is rightly considered to be among the best in the world in his position, but try telling that to PSG coach Mauricio Pochettino. The former Milan shot-stopper started just two of the French capital club’s opening 10 Ligue 1 fixtures as second choice to veteran Costa Rican Keylor Navas.

Whether a victim of behind the scenes manoeuvres – Navas has allies in high places, not least Lionel Messi – or an early breakdown in his relationship with Pochettino, the Italy international could not have been satisfied with his initial role.

Already heavily linked with a return to Italy and Juventus in January, Donnarumma was finally handed a starting berth and kept a clean sheet in the crucial Champions League victory over Manchester City. Perhaps it’s a sign of better things to come in the French capital for the Euro 2020 winner.

Eusebio Di Francesco had the ignominious honour of ‘winning’ the sack race. Three defeats to open the new season was too much for Hellas Verona, who quickly dismissed the 52-year-old on September 14.

The beleaguered coach was stuck in a dismal rut after similarly unsuccessful tenures at Cagliari and Sampdoria. Croatian Igor Tudor was drafted in as his replacement and immediately oversaw a thrilling 3-2 comeback victory over Jose Mourinho’s Roma.

Semplici says farewell to Cagliari: ‘It’s been a privilege’

Cagliari also opted for a managerial change just three games in as Leonardo Semplici was fired following a 3-2 home collapse against Genoa.

The vastly experienced Walter Mazzari was quickly appointed at the Sardinian club but struggled to steady the ship as Cagliari remain anchored at the wrong end of the standings as September came to a close.

Serie A as it stood on September 30 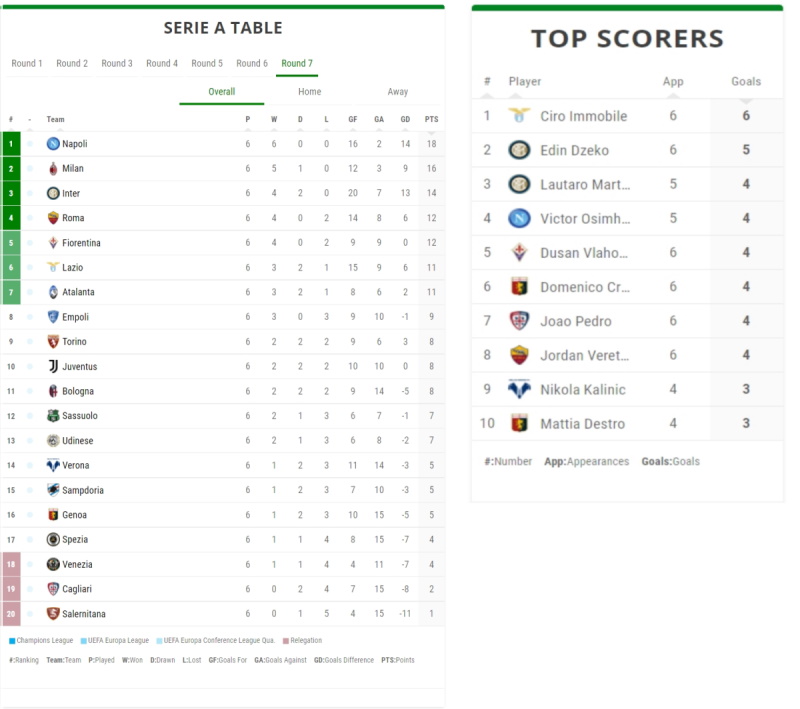