Watch Serie A Live – Stream Serie A with Express VPN

For passionate crowds, glamorous and successful clubs at home and in Europe and brilliant players from today and yesteryear, there is only one league to turn to: Serie A. Indeed, while other leagues in other countries have trophy-laden clubs of their own, few names carry the weight of Juventus, Inter and Milan, Italy’s three most successful clubs and some of the most successful in European football. Today, Juve and the Milan clubs regularly fight it out at the top of Serie A and in the latter stages of the Champions League. They have some of the most talented players anywhere in the world, and produce some of the most thrilling games. It’s undeniable that Serie A is the most entertaining, exciting league in the world.

Juve, Inter and Milan are far from the only clubs worth watching. Italian football is blessed with brilliant teams such as Atalanta, a club from outside the traditional powerhouses that smashed into the top four of Serie A and made an impression in Europe too. And there’s still Roma, Lazio and Fiorentina, some of the biggest names in calcio history. There is great action to be seen in Serie A whoever takes to the field, from the most glamorous clubs on the peninsula to the less-heralded outfits striving to reach the top.

How to watch Serie A with ExpressVPN

ExpressVPN allows football fans to watch Serie A anywhere in the world in three easy steps:

2. Connect to a server based in the country you want to watch from

3. Head to a streaming platform showing Serie A in that country and create an account with them

How do I use a VPN to watch Serie A live?

Let’s say you want to watch Serie A live on DAZN. DAZN show Serie A live in Italy, and watching the Italian broadcasts of live Serie A fixtures is a great way to experience the passion for football from the peninsula if you can’t actually be there.

Using a VPN and a server based in Italy to access the DAZN website opens up the ability to watch Serie A live as if you were in the home of calcio yourself. 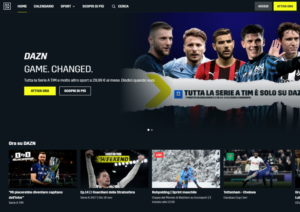 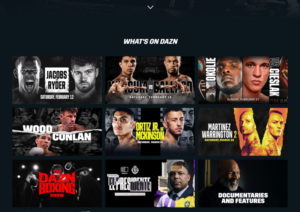 DAZN’s website when viewed from the UK without a VPN

The same method should work with any broadcaster of Serie A matches anywhere in the world.

A VPN free trial is a good way to decide if a VPN is for you. ExpressVPN offers a risk-free, 30-day money back guarantee after sign-up and three months extra – free – if you sign up for 12 months.

How to watch Serie A with ExpressVPN – YouTube tutorial

What is a VPN? What does a VPN do?

VPN stands for virtual private network. A VPN changes the location of your internet server, hiding your true location from the websites you visit.

Essentially, a VPN is a tool for keeping your internet connection safe and protecting your online privacy. By creating your own private network, you can add an extra layer of security to your web use, as your VPN provides you with online anonymity.

VPNs are a method of protecting internet users’ security, and in 2022 around one in three people around the world have used a VPN. The reason for their huge popularity is because they protect people online, including from being hacked. With life taking place online more than ever, VPNs have become a key part of personal safety when using the internet.

Why use a VPN?

VPNs are used for a number of reasons, but security, privacy and accessibility are the main reasons people choose to use a VPN. 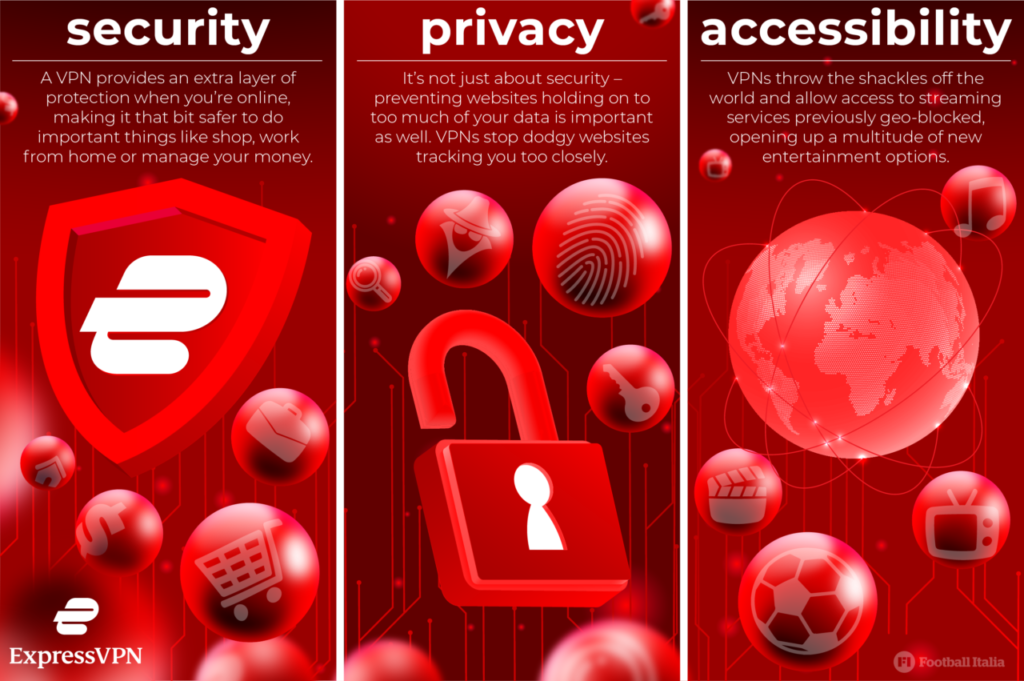 How does a VPN work?

VPNs create an encrypted tunnel for your online data, helping to keep it safe from nefarious folk who lurk in the dark corners of the web. VPNs mask your internet protocol (IP) address, which allows you to use public Wi-Fi hotspots safely, while also adding an additional layer of security at home. The secure, encrypted connection they provide is much safer than a standard connection. Anyone who regularly accesses public Wi-Fi hotspots should benefit from the use of a VPN, but they have their place in the home, too.

If you’re wondering why do I need a VPN, there are plenty of uses to consider. Firstly, they help to keep your personal details private when you’re on the internet, including things like your name, address and bank details. This means it’s safer to shop, pay bills and bank online, as well as use your email account, which can be linked to lots of other personal information. A VPN can also hide your information from malicious advertisers and other potentially harmful presences on the internet.

Not only that but accessing the internet through a VPN prevents your internet service provider (ISP) from slowing down your connection, a process known as throttling. This often occurs at the busiest times of day – when more people are using the servers for their online activity, usually after getting home from work or school. Using a VPN provides the best balance between security and speed as your ISP can’t slow down your connection if your activity is hidden by a VPN.

A VPN can hide your browsing history, web activity, the devices you’re using, your IP address and location. It’s the last of these things that we’re most concerned with at Football Italia. Why? Because it means you can log into your various accounts for watching Serie A online and stream matches both legally and safely.

Some streaming services are unavailable outside your country of origin, but you may still want to catch the latest Serie A action when you’re away on holiday or business, or visiting family abroad. In selecting a VPN in your home country to access your TV services, you can stay on the right side of the law while keeping track of your team abroad.

Where can I get a VPN?

Whether you’re most concerned with protecting yourself against identity theft or how to watch Serie A online when travelling, there are lots of different VPN providers out there to choose between. The No 1 VPN provider us ExpressVPN.

ExpressVPN offers secure online connections worldwide. It works seamlessly wherever you go, thanks to its network of ultra-fast servers across 160 locations in 94 different countries. Delivering unlimited bandwidth and lightning-quick connectivity, ExpressVPN has excellent ratings on Trustpilot and Apple’s App Store, and is currently offering three extra months free when you purchase a 12-month subscription.

Going for a 12-month plan cuts the monthly cost of the service by nearly 50%, while you can also opt for a 6-month subscription if you want to test the water a little before taking the plunge. However, all plans come with a 30-day money-back guarantee, so you can trial the service for a month before committing to any subscription.

ExpressVPN is a market leader in providing VPNs, and it also leads the way with the best deals you can get. Sign up here to gain access to your exclusive three months free offer, where you get 15 months for the price of 12.

With 24/7 live chat support, ultra-fast servers across 94 countries, the highest level of security and encryption and no activity or connection logs, ExpressVPN has earned its reputation in a crowded VPN market.