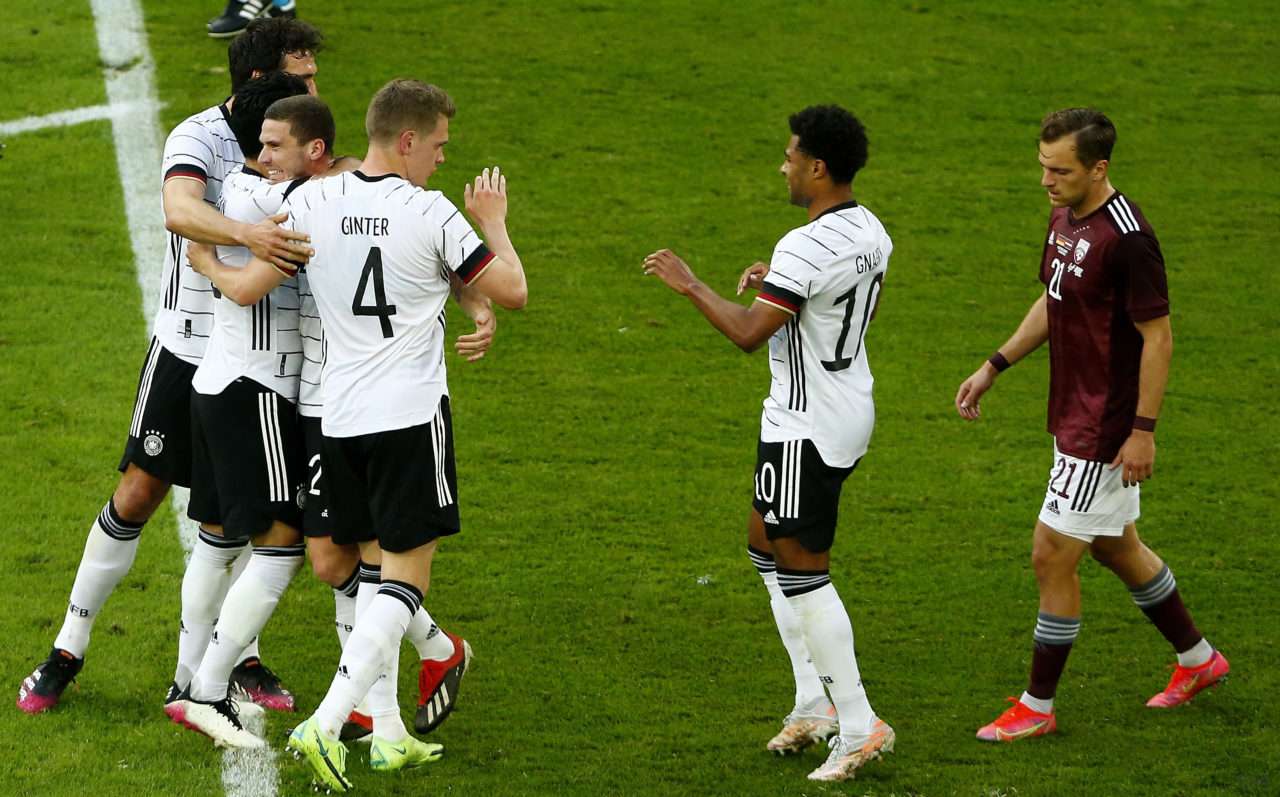 Joachim Löw will end his 16-year spell as Germany national team coach after the Euros and Louis Miller believes the Germans lack a reliable centre forward to win the tournament.

Going out on a high?

Despite an attempt to revamp the side, under Joachim Löw, Germany have struggled of late. There have been some signs of progress though, the 2014 World Cup winners only lost once in the 2020 Nations League but that was an embarrassing 6–0 defeat to Spain, their biggest ever on record.

And it led to some of the German press calling for the coach’s head. A 2-1 home defeat to North Macedonia followed in March of this year, which has done little to boost confidence.

Memories of their group stage exit in Russia three years ago are still fresh, but Löw won’t feel the pressure of keeping his job this time as this will be his seventh and last major tournament in the Germany dug-out as departing Bayern Munich coach Hansi Flick has already been announced as his successor.

Robin Gosens is the only Serie A player included in the team and although he is expected to be a starter. Every fan of Italian football knows how much he can bring to any team. The 26-year-old has 12 goals and eight assists in 44 appearances with La Dea and can be a threat whether he starts or comes off the bench.

Thomas Müller and Mat Hummels sensationally return to the squad for the first time since March 2019, when Low cut their international career’s short. Young Bayern midfielder, Jamal Musiala, is also in the squad and will look to add to his two caps earned since choosing Die Mannschaft over England.

It remains to be seen where Muller will feature in an attack that also features Gnabry, Sane and Werner. Kai Havertz will also be looking to make a claim for a starting spot, fresh after scoring the winner in the Champions League final.

The Germans are among the favourite to lift the cup along with France who they will face in the first game of the group stage on June 15.

They have been capable of anything during Löw’s 16-year reign as their coach. They went from winning the 2014 World Cup in Brazil to being eliminated in the group stage four years later. Their worst results in more than eight decades.

The quality is there for the Germans, but perhaps they are without a reliable centre forward as neither Muller, Kevin Volland or Timo Werner managed to score more than 20 goals in 2020-21.

Muller netted 15 goals with Bayern Munich, Volland had 18 across all competitions with Monaco and Werner scored 12 in his first season at Chelsea.

If any of them step up and find the net consistently during the tournament, Germany will have a chance to win the first European Championship since 1996.

Coach: Joachim Löw – announced he would stand down after the tournament regardless of the result. Former Bayern coach, Hansi Flick, will be taking over after the championship. Flick was Low’s assistant from 2008–2014 when the side lifted the World Cup in Brazil.

Look out for: Robin Gosens – Serie A fans will keep a keen eye out for Atalanta wing back Robin Gosens, who has benefitted from a switch to a 3 – 4 – 3 formation in recent months. The left wing-back managed 11 goals and 6 assists in Serie A this season, helping his side to a third successive Champions League spot.

How they got to Euro 2020: Germany topped their group, finishing two points ahead of the Netherlands by winning seven of their eight games. The only defeat came in September 2019 when they lost 2 – 4 by the Dutch.