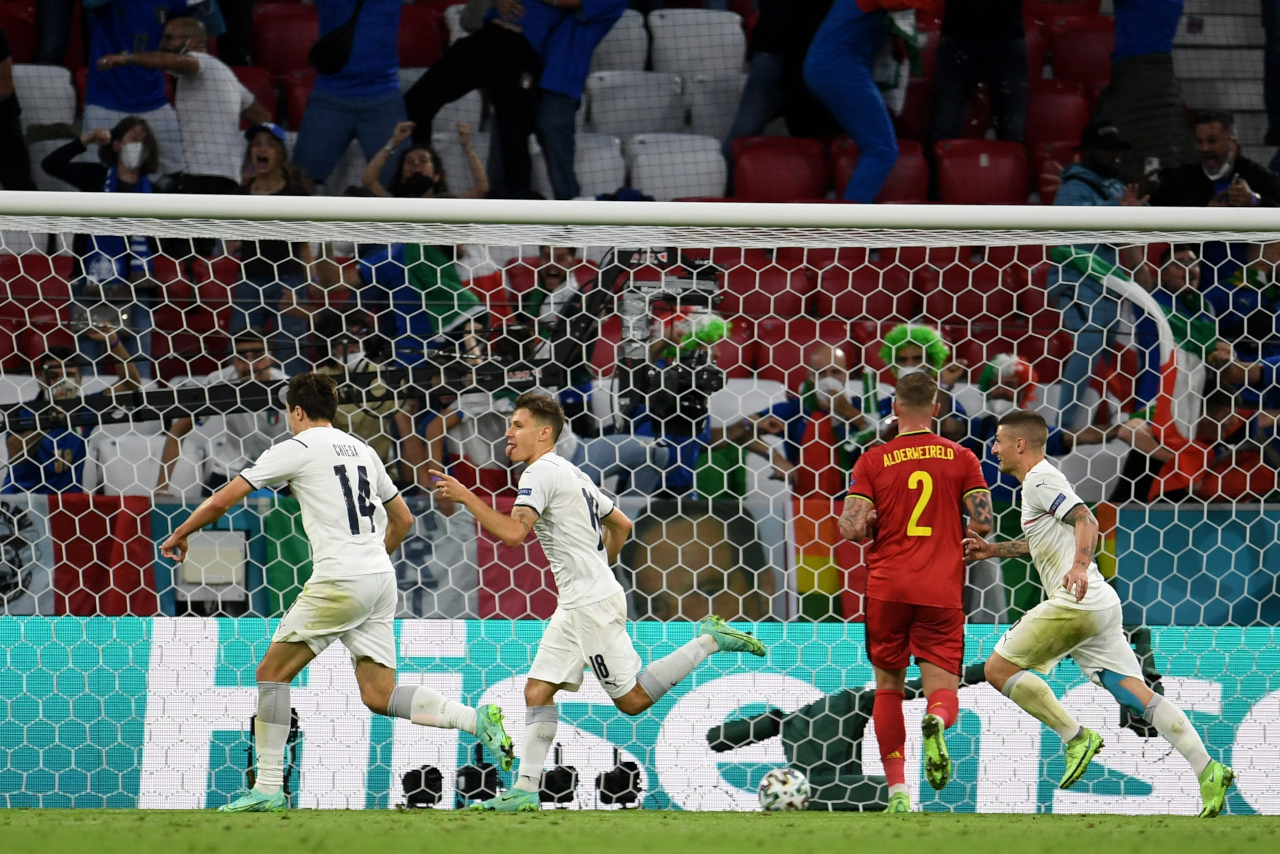 Italy are in the UEFA EURO 2020 semi-final against Spain after beating Belgium 2-1 with goals from Nicolò Barella and Lorenzo Insigne, but lost Leonardo Spinazzola to injury.

The winners of this quarter-final will go on to meet Spain in the semi on Tuesday. Both won every game so far at EURO 2020, although the Azzurri needed extra time against Austria, between them conceding a total of two goals. Giorgio Chiellini returned from injury and Federico Chiesa was picked ahead of Domenico Berardi, while Kevin De Bruyne was able to start despite an ankle knock and Eden Hazard was ruled out, replaced surprisingly by 19-year-old Jeremy Doku.

Leonardo Bonucci had the ball in the net after 13 minutes, but Chiellini was already offside when flicking on the Lorenzo Insigne free kick for him.

Chiellini got his head in the way of a De Bruyne strike, then Gianluigi Donnarumma made a sensational one-handed save on the Manchester City star. He was also at full stretch to deny a Romelu Lukaku counter-attack, while Chiesa had two attempts charged down and a trademark Lorenzo Insigne curler was over.

Italy did break the deadlock when Ciro Immobile was down after a penalty appeal, but Verratti intercepted the clearance, Nicolò Barella shimmied past two defenders and drilled into the far bottom corner. This was only the second goal Belgium had conceded in EURO 2020.

Chiesa curled just wide after a corner was cleared to the edge of the box, then Immobile wasted a huge chance when he should’ve passed it to Chiesa, but insisted on getting the shot away himself.

Moments later, Insigne surged forward, rode a tackle and unleashed his trademark right-foot curler that flew into the far corner past Thibaut Courtois for 2-0.

However, on the stroke of half-time, Giovanni Di Lorenzo was rather harshly penalised for a nudge on Jeremy Doku and Lukaku converted the penalty.

Jorginho had appeals for a clumsy De Bruyne challenge waved away by the referee, but Leonardo Spinazzola made a decisive block to prevent Lukaku tapping in the De Bruyne assist at the back post from a yard out.

At the other end, Immobile again made an error with a poor touch on Chiesa’s cross and the Juventus winger forced a save out of Courtois from a tight angle.

Spinazzola had a huge chance, his volley on an Insigne ball over the top flashing wide of the near post, then Insigne’s curler palmed away at the far bottom corner.

Nacer Chadli came on and immediately his cross was deflected inches beyond both Lukaku and Thorgan Hazard, then limped off with an injury just four minutes later.

Roma left-back Spinazzola also pulled up mid-run with a clearly bad thigh strain and was stretchered off in tears.

Doku skipped through three tackles to fire over the bar, but Italy clung on in the final stages, looking increasingly fatigued.