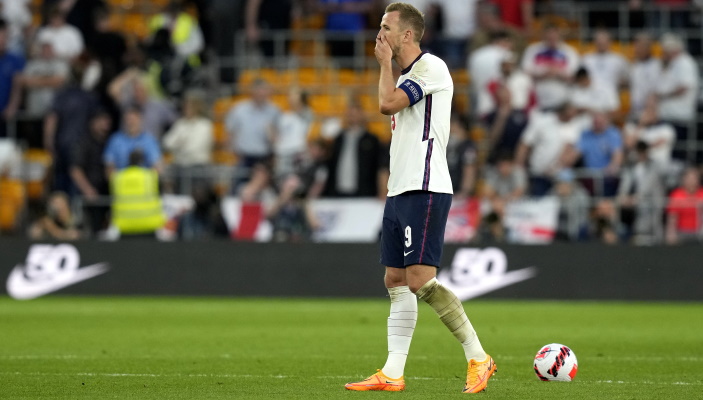 The 2022/23 UEFA Nations League wraps up in the coming weeks, and these England vs. Germany predictions look at an eye-catching campaign finale. The visitors are still in the running to clinch a UEFA Nations League finals spot with England aiming to avoid relegation to League B.

This fixture is one of the most famous in world football history with previous meetings serving up some iconic moments.

Despite not being included within a major tournament, there is still plenty on the line at Wembley, with the home side fighting for their League A survival in London.

England endured a nightmare run of results in the first half of the UEFA Nations League back in June, with two points from four games, as their worst streak of results under Gareth Southgate.

That inconsistency means England could slip from Euro 2020 finalists into a League B side during the international window.

However, Germany’s own mixed form gives the Three Lions some optimism, with Hansi Flick’s side only winning once during their own summer series of matches.

That lack of spark from either side hints at a draw in this one but whether it will be enough to save England’s League A status is uncertain.

England’s poor form has also signalled a drop in the number of goals they have scored this season, with Harry Kane’s penalty in Munich their only goal of the competition up until this window, with three blanks for Southgate.

Germany, on the other hand, scored eight in the first four games, but they had only managed two away from home.

In their combined eight games previous to this window, either side had only been involved in a game with over 2.5 total goals scored on three occasions, with Germany only scoring more than once against Italy in Monchengladbach.

Despite their struggles, the prospect of England not scoring at home for a third successive game looks unlikely and Germany have scored more this season. A tight draw would continue that pattern.

How to stream England vs. Germany

You can stream England vs. Germany live on Monday night via a bet365 stream with customers able to watch the full game through a valid account. This includes having sufficient funds in your betting wallet or placing a new bet up to 24 hours before kick-off.

Southgate is set to recall John Stones, following a one game suspension, with the Manchester City centre back set to return in defence. Nick Pope will continue in goal with Liverpool skipper Jordan Henderson drafted into the squad due to an injury for Kalvin Phillips.

Flick has the majority of his experienced stars available for these games. Borussia Dortmund winger Marco Reus is sidelined through injury but key trio Antonio Rudiger, Joshua Kimmich and Thomas Muller are all included.