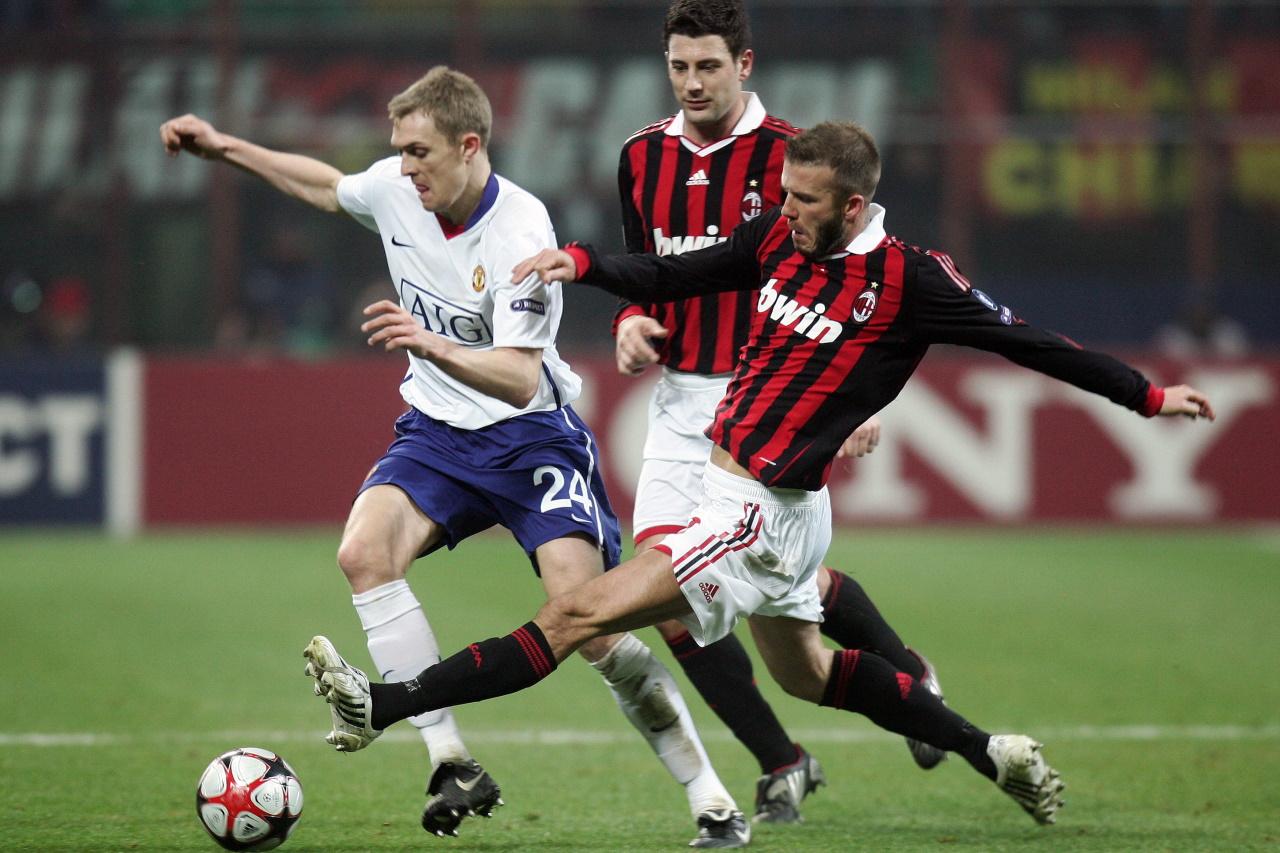 Forget Paul Gascoigne. Move over Tammy Abraham. Put away that Scudetto winner’s medal Fikayo Tomori. These are the English players you didn’t know – or might have forgotten – played in Serie A.

There was an influx of English players to Serie A in the late 1980s and early 1990s. English clubs were banned from European football after the Heysel Stadium disaster and a number of players, keen to broaden their horizons, headed to Italy. The three foreigner rule in place at the time was a factor too – Serie A clubs could have no more than three non-Italians at any one time, so foreign imports were spread across the league.

That changed when the rule was relaxed, English clubs returned to European football and the Premier League began its inexorable rise to the flashy behemoth it is today. But for a few years, Italy was home to an English enclave and since then, there have been some surprising or long-forgotten residents. Ahead of Italy’s meeting with England in the UEFA Nations League, here is a selection of Englishman who spent time on the peninsula.

Watch the UEFA Nations League on Premier Sports – subscribe now for only £9.99 a month 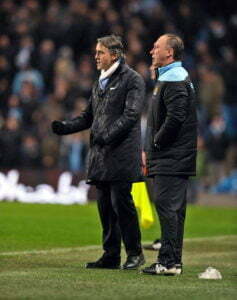 Remember when an England international midfielder – the national team captain, no less – who frequently wore the No 7 shirt for his country turned out in Serie A? No, not David Beckham’s brief stop at Milan (more on that later), but rather David Platt’s four years in the peninsula.

Platt was another one to make the trip from Aston Villa to Bari but despite 11 goals in 29 games, he couldn’t prevent I Galletti dropping into Serie B. A move to Juventus and a UEFA Cup win followed but Platt was never a regular under Giovanni Trapattoni, with injuries an issue, and he was again on the move a year later.

Sampdoria would be Platt’s third and final posting in Italian football, under future England manager Sven-Goran Eriksson. It was here that Platt linked up with Roberto Mancini, going on to become part of the current national team coach’s Manchester City staff in 2010 (pictured, left), and here where Platt enjoyed the best years of his Italian sojourn. He made 55 appearances for the Genoa club, scoring 17 goals, and won the Coppa Italia before returning to English football with Arsenal. In total, Platt scored 31 goals from midfield in 100 Serie A appearances.

A strapping, journeyman centre-forward, Paul Rideout arrived at Bari in 1985 after a few years at Aston Villa. He left three years later after a respectable 23 goals in 99 games and after bouncing around a few clubs without settling – Southampton, first club Swindon Town on loan, Notts County and Rangers – Rideout entered Everton folklore with the winning goal in the 1995 FA Cup Final. Joe Royle’s side beat Manchester United 1-0, ending an eight-year wait for a trophy – but starting a drought that stands at 27 years and counting.

Rideout played in China and the United States after leaving the Toffees in 1997, with his career closing back in England’s North West at Tranmere Rovers.

One-time England international Jay Bothroyd (pictured, shielding the ball from Paolo Maldini) arrived at Perugia under the late Luciano Gaucci, the controversial former owner who passed away in February 2020. Bothroyd’s signing was considerably less contentious than that of Al-Saadi Gaddafi – third son of former Libya leader Muammar Gaddafi – but the ex-Arsenal youth team striker still struggled to make an impact in Serie A.

Bothroyd joined I Grifoni from Coventry City, having been released by the Gunners after a show of insubordination directed at veteran youth team coach Don Howe. The Sky Blues paid £1m for him as an 18-year-old, despite Bothroyd never having played a senior first team game. 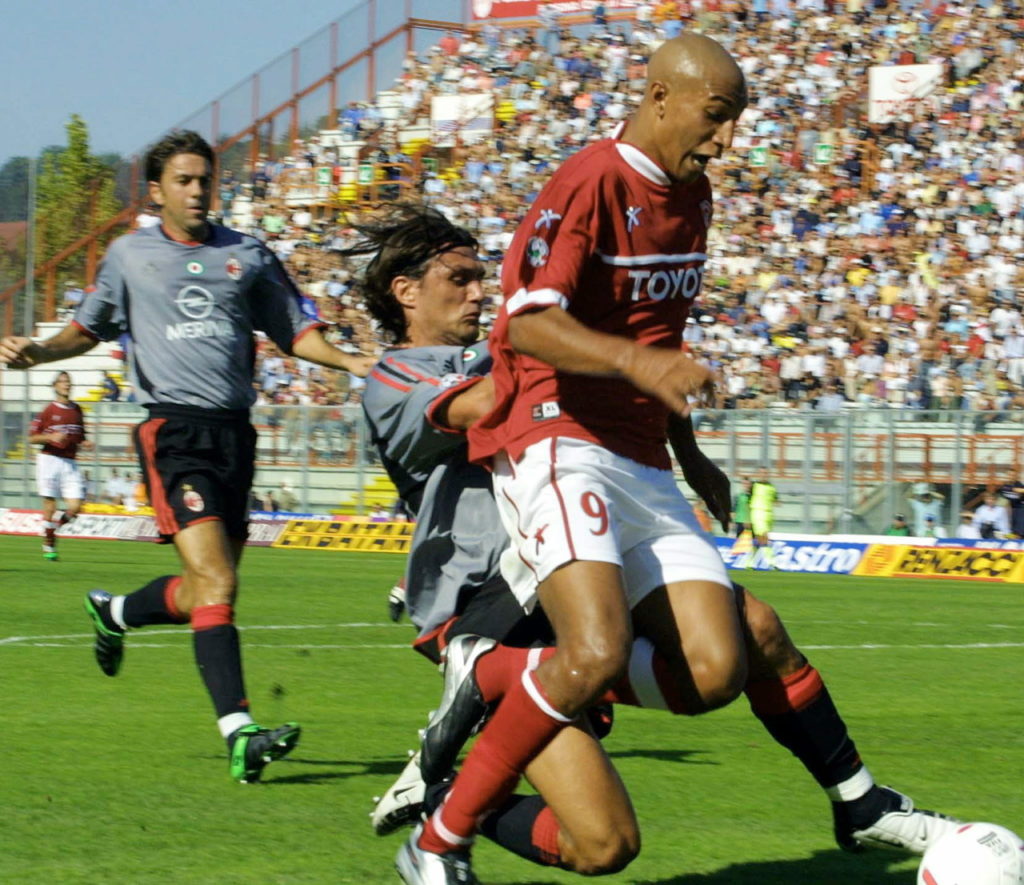 A haul of 17 goals later and Bothroyd was on his way to Perugia for the 2003-04 season after his Coventry contract expired. He made 26 appearances in his first year with the Umbria club, scoring four goals as Serse Cosmi’s side finished 15th in the 18-team league and faced a relegation play-out with Serie B’s Fiorentina. The Viola won 2-1 on aggregate to return to the top flight.

Bothroyd joined Blackburn Rovers on loan for the 2004-05 season and left Perugia permanently in 2005, later recalling the racist abuse he suffered from fans during his time in Italian football. Bothroyd bounced around a number of clubs until ending his career in Japan, with Hokkaido Consadole Sapporo, but it was at Cardiff City that he had his greatest success, scoring 45 goals in 133 games and winning his only England cap – as a Championship player – in a 2010 friendly defeat against France.

A Manchester United prodigy – the Red Devils paid £200,000 to Torquay United for the 17-year-old in 1988 – injuries had taken their toll on Lee Sharpe by the time he joined Sampdoria on loan from Leeds in 1998.

Sharpe was brought to the Stadio Luigi Ferraris by the aforementioned David Platt, who had replaced Luciano Spalletti in December 1998. Technically, Platt was the team’s ‘supervisor’ as he lacked the coaching credentials for the job, but even with a compatriot on the bench, Sharpe’s impact was limited. He made only three appearances for I Blucerchiati and by March 1999 his loan had been terminated and he was playing instead for Bradford City. Platt was already gone, departing in February.

Joe Hart’s year in Turin made him the first English goalkeeper to sign for a Serie A club, and it was a shock when the current Celtic stopper arrived at the Granata.

Hart lost his place at Manchester City as Pep Guardiola pursued a goalkeeper more comfortable with the ball at his feet and the then-England No 1 was reported to have suitors across the Premier League and into Europe. The presence of Atillo Lombardo – the former City coach who was working as assistant to Sinisa Mihajlovic – was a factor, as was Hart’s desire to experience Italian football.

“Torino’s offer came at the right moment for me, in the right manner, and I’m very excited to test myself in an important and beautiful league such as Serie A,” he said at the time. “I already know Attilio Lombardo, we won a lot working together in Manchester and I hope to experience the same success this year. The coach here wants humility and ambition. I like that. That’s how I want to be.”

Urbano Cairo, the Torino President, spoke warmly of Hart at first but changed his tune as the season progressed. “Hart made a few mistakes, especially when coming out for the ball,” Cairo said. “He is an important goalkeeper. We probably didn’t expect so many mistakes from an England international…but he did some good things, too.”

Hart’s Italian adventure would ultimately last only a season and despite Cairo’s comments, Hart enjoyed his time at the club. “Thank you Torino, I am so proud to have played for your special football club,” Hart wrote on social media when his loan expired.

“The way you have treated me and my family is something that we will never forget. I will forever support Torino for the rest of my days. I have met so many special people and this has been one of the greatest experiences of my life.”

David Beckham’s time in Serie A was short but sweet. He joined Milan on loan from LA Galaxy in January 2009 and liked it so much, he came back a year later. 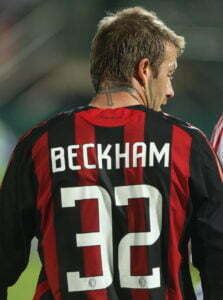 Perhaps it was only fitting that a player derided for being more of a clotheshorse than a footballer – in spite of his plentiful goals and assists from midfield for club and country – eventually turned up in one of the world’s fashion capitals. But even though it was only intended to be a short-term move, Beckham’s time with the Rossoneri was about more than appearances.

This was the Milan of an in-his-prime Kaka, of Ronaldinho and Andrea Pirlo and veterans Paolo Maldini, Clarence Seedorf and Pippo Inzaghi still with plenty to offer. Carlo Ancelotti was the coach, and few trainers have worked with ageing superstars as well as the current Real Madrid boss.

Indeed, Beckham enjoyed his first spell in Italy so much he spoke of wanting to move to the club permanently, with a place at World Cup 2010 in mind. That never happened – Milan and the Galaxy couldn’t agree terms – but he did return in January 2010 to try and convince Fabio Capello to take him to South Africa. It also meant Beckham returned to Old Trafford to face Manchester United for the first time since leaving in 2003, coming off the bench to a rapturous reception and, post-match, donning a green-and-gold anti-Glazer family scarf that he later denied was worn in protest at the owners.

An Achilles injury suffered against Chievo in March meant Beckham’s World Cup aspirations ended early, however, and his Milan career ended then too, after 33 appearances and two goals across two loan spells.

Watch the UEFA Nations League on Premier Sports – subscribe now for only £9.99 a month