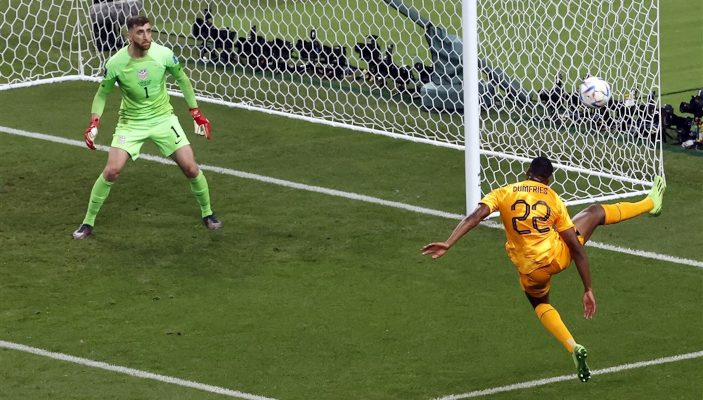 Inter wing-back Denzel Dumfries put in a Man of the Match performance for the Netherlands in the World Cup Round of 16 with two assists and a spectacular volley against the USA.

This will have done the world of good to his transfer price, especially with strong reports already that Inter see him as the player who can be sacrificed to raise funds on the market either in January or next summer.

Dumfries was absolutely decisive for the Netherlands in Qatar today, as after providing two assists for Memphis Depay and Daley Blind, he then secured a 3-1 lead with a well-taken volley at the back post.

That means he is the first player in the 2022 World Cup to be directly involved in at least three goals during a single game.

Inter signed the 26-year-old from PSV Eindhoven in 2021 for just €14.25m as a replacement for Achraf Hakimi of Morocco, who was sold at a huge profit to Paris Saint-Germain.

Now it looks as if Dumfries will be another cash cow for the club, after two goals and three assists in 20 appearances for Inter this season.

He is under contract until June 2025 and has already been linked with Tottenham Hotspur, but the price-tag is rising well above €50m with his performances for the Netherlands.