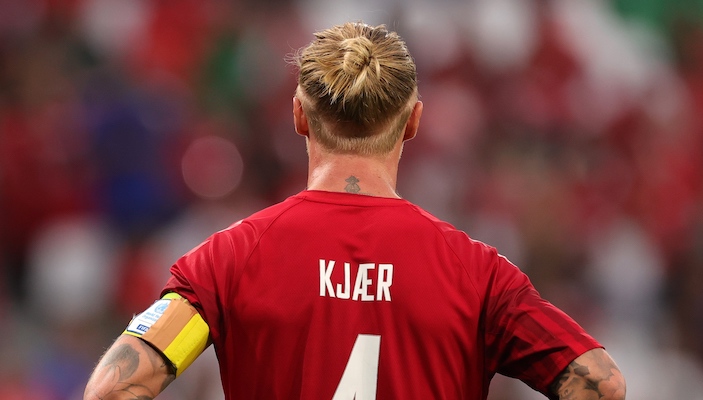 The 33-year-old Danish centre back, who is the captain of his national team, played 65 minutes of their opening game against Tunisia before coming off, looking defensively solid in a fairly lacklustre match. His exclusion from the key clash with France confused many, with Milan fans in particular concerned after his struggles with injuries over the last couple of years.

Speaking in a press conference, Hjulmand first reacted to Denmark’s loss to France at the World Cup.

“Matches in this competition are very different, we were not very good against Tunisia, it is true. Tonight the game was tight against one of the best teams in the world.

“Like during the European Championship, when we faced a great team in the second game, we had zero points and yet we managed to qualify.

“We will see what happens against Australia. But there is always hope.”

He then explained why Denmark captain Kjaer was left benched for the second World Cup group game.

“We knew he couldn’t play and we don’t know if he will be able to play on Wednesday against Australia.

“He was still feeling discomfort, we got confirmation of that during the last test yesterday. But Victor Nelson did a great job.”

The 33-year-old Kjaer has made nine appearances across all competitions this season for Milan, for a total of 623 minutes. Last season, the Dane only made 14 league appearances after suffering a cruciate ligament rupture in December 2021.