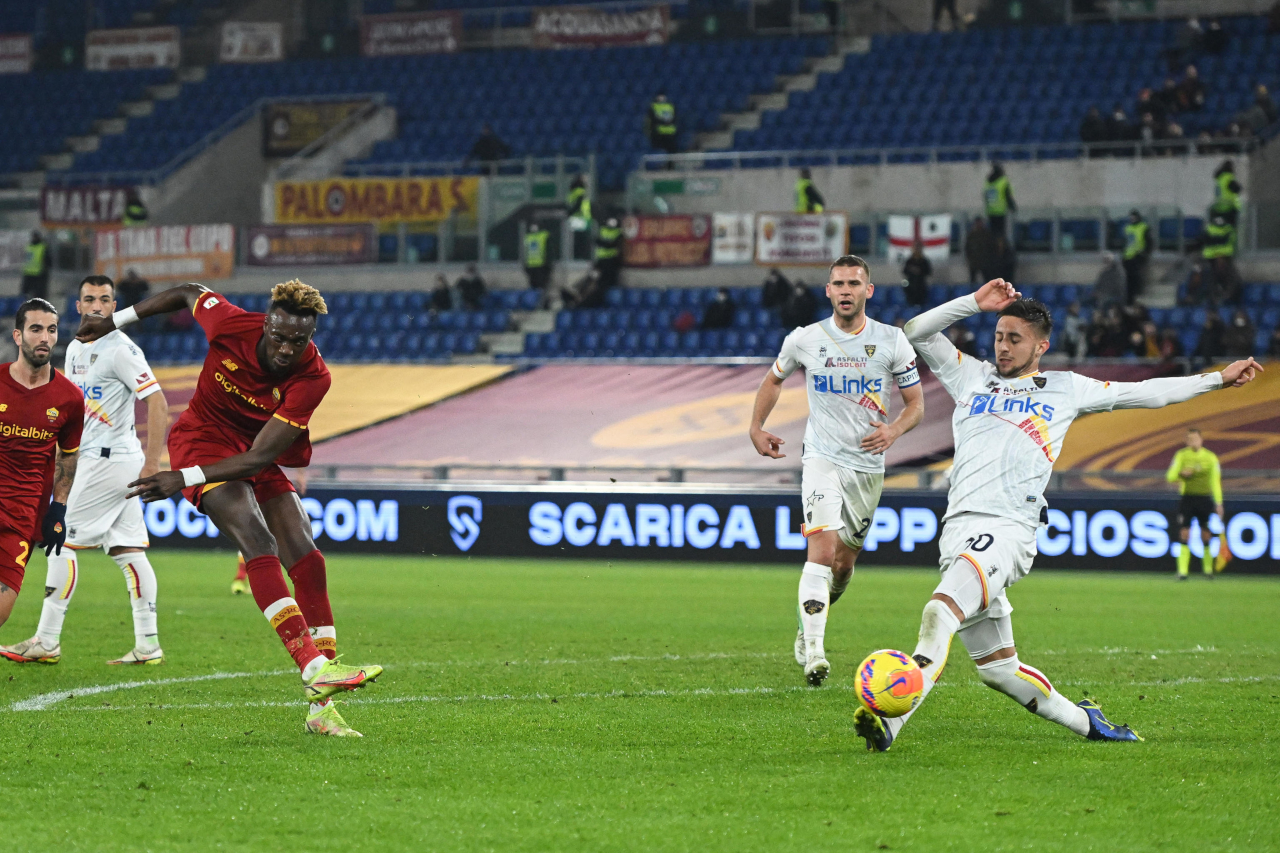 Roma fought back from an early Lecce goal with Marash Kumbulla, Tammy Abraham and Eldor Shomurodov on target, setting up a Coppa Italia quarter-final against Jose Mourinho’s old club Inter.

The hosts had Gianluca Mancini suspended, Lorenzo Pellegrini, Leonardo Spinazzola and Stephan El Shaarawy injured, Chris Smalling with COVID, while Amadou Diawara and Ebrima Darboe were at the Africa Cup of Nations. Lecce were the only remaining Serie B side in the competition and missed Pablo Rodriguez, Alessandro Tuia, Luca Paganini and Fabio Pisacane.

Lecce started strong, as Mario Gargiulo was only denied by a desperate Roger Ibanez defensive block. On the resulting corner, Arturo Calabresi nodded in, the offside flag went up for Gargiulo’s position, but he too was level and the goal given via VAR. Curiously, Calabresi was a product of the Roma youth academy.

Carles Perez forced a save from distance, on which Marco Bleve sustained an injury and made way for Gabriel.

It took until the 27th minute for a real Roma chance, Gabriel fingertipping a Felix Afena-Gyan lob wide, but the equaliser arrived when a corner was flicked on by Tammy Abraham for the head of Marash Kumbulla at the back post.

Jose Mourinho made a triple change at the break and within a minute Nicolo’ Zaniolo’s solo run and strike was palmed onto the upright by Gabriel.

Abraham turned the game around when Zaniolo’s dummy let a Henrikh Mkhitaryan ball through, the England international controlled and spun round to drill home from the edge of the box.

Lecce then went down to 10 men for Gargiulo’s second bookable offence on Zaniolo. It turned into a siege on Gabriel, parrying from Abraham and Zaniolo, while Mkhitaryan horribly wasted a perfect counter after combining with Zaniolo.

Substitute Zaniolo was fired up and aimed another couple of attempts just wide, but Eldor Shomurodov made it 3-1 after surging forward on a spectacular Mkhitaryan volleyed assist from midfield.