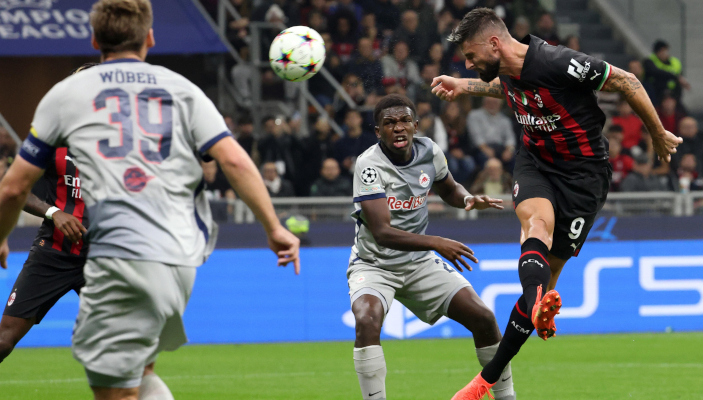 Milan emphatically booked their place in the knock-out stages in an otherwise disappointing week for Italian clubs in the Champions League.

The Rossoneri crushed RB Salzburg 4-0 at San Siro but it was a different story for the three other Serie A sides in the competition.

Napoli lost for the first time this season, at Liverpool, Inter were denied a clear penalty in a two-goal defeat at Bayern Munich while Juventus were much improved in a 2-1 reversal against Paris Saint-Germain in Turin.

Here are four things we learned for matchday six in the Champions League.

Giroud reliable as ever on the big stage

Milan forward Olivier Giroud is firmly in the veteran class but showed he still has plenty to offer with two goals and an assist in the Rossoneri’s four-goal rout of RB Salzburg at San Siro.

Stefano Pioli’s side only required a point to progress from Group E but claimed all three in style as the 36-year-old stole the headlines again.

Giroud netted a number of crucial goals as Milan won the Scudetto last season and was the main man on a night to remember for the champions.

The France international rose to the occasion to head home from Sandro Tonali’s corner, set up Rade Krunić with a brilliant headed assist and rifled home after Rafael Leão dribbled round the entire Salzburg defence.

Giroud proved he can still cut it at the top level of European football as both Theo Hernandez and Leão excelled as Milan made it to the round of 16 for the first time in nine years.

The Partenopei finally lost their unbeaten record this season as concerns emerged about set-piece defending in a two-goal defeat at Liverpool.

Napoli had already secured qualification to the knock-out rounds before the final group match but were exposed in an alarming late collapse at Anfield.

Central defenders Kim Min-jae and Leo Østigård had admirably repelled a fast-paced, physical approach from Jürgen Klopp’s side before Mo Salah and Darwin Núñez both scored from corners.

The centre-back pairing were at fault along with goalkeeper Alex Meret who spilled the ball twice on his own goal-line as Salah and Núñez claimed easy goals.

Østigård had a goal ruled out for a marginal offside decision as Napoli fell to a first defeat in any competition this season.

It was far from a disaster though for the runaway Serie A leaders as despite the loss they clinched first place in Group A on goal difference ahead of Liverpool.

Luciano Spalletti’s great entertainers showed they are not infallible as the defensive disarray highlighted the absence of injured central defender Amir Rrahmani.

Inter the latest Italian club to suffer from poor officiating

Although Inter had already sealed their place in the Champions League round of 16 they were denied a first half penalty in ridiculous fashion.

Slovak official Ivan Kružliak took an age at the pitch side monitor and then remarkably failed to award a spot-kick.

It was another instance of officiating incompetence in a long line of dodgy calls against Italian clubs in Europe. Thankfully it didn’t affect Inter’s progress in what was a game of little consequence at Allianz Arena.

Midfielder Kristjan Asllani and defender Raoul Bellanova both showed flashes of promise in rare starts as Inter faded after a promising start in Munich.

Federico Chiesa’s comeback was one significant plus point for the Bianconeri as they fell to a fifth Group H defeat against Paris Saint-Germain.

Chiesa had been sidelined since January but featured as a late second half substitute in a spirited Juve display against the French champions.

Despite his long absence the 25-year-old displayed signature surges of pace and skill in a short cameo as PSG eventually prevailed 2-1 at the Allianz Stadium.

Chiesa’s long-awaited return will surely act as a catalyst for a Juventus side humiliated in Europe and underwhelming in Serie A.

The Bianconeri could save money in the January transfer window with a fully fit Chiesa and promising crop of young talents pushing the underperforming veterans for places in Juve’s starting line-up.

One Comment on “Chiesa can kick-start Juventus, Giroud Milan’s Mr. Reliable and more – four things we learned from the Champions League this week”