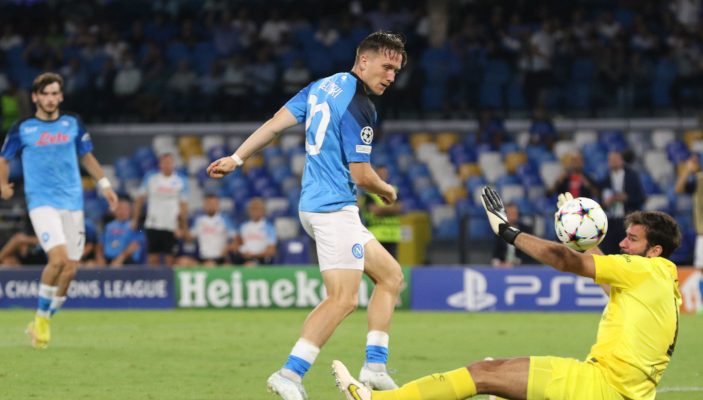 The Partenopei were able to start Osimhen despite a muscular issue, but Mario Rui had gastroenteritis and Hirving Lozano wasn’t fully fit after a clash of heads. Last season’s finalists made the trip without Jordan Henderson, Ibrahima Konaté, Alex Oxlade-Chamberlain, Naby Keita, Calvin Ramsay, Caoimhin Kelleher, Fabio Carvalho and Curtis Jones, while Thiago Alcantara was back on the bench after a month out.

It was almost the perfect start, as in the second minute Osimhen got to a ball over the top before Alisson Becker, got around the goalkeeper, but then narrowed the angle too much and could only hit the near post.

It was constant swarming from the Napoli players, who earned another penalty when Virgil van Dijk was late on Osimhen and stamped on his foot, the decision this time given after a VAR review. This time Osimhen wanted to take it and it was parried by former Roma goalkeeper Alisson.

Alex Meret fingertipped a Trent Alexander-Arnold free kick over the bar, but it should’ve been 2-0 when Osimhen sprung the offside trap, pulled back for Kvaratskhelia, who was denied by a desperate Van Dijk goal-line clearance.

The second goal did come, as Kvaratskhelia caught Gomez in possession to spark a counter, as Andre Frank Zambo Anguissa completed a give and go with Zielinski to carve the Liverpool defence apart.

The visitors did fight back, Van Dijk’s header into the ground parried and Harvey Elliott turning wide at the back post.

Osimhen had been in doubt with a muscular problem and pulled up mid-run to be replaced by Giovanni Simeone before half-time.

It proved an inspired change, because within three minutes of his Champions League debut, Simeone was on the scoresheet. He was in the right place to prod in from six yards after Kvaratskhelia turned both Gomez and Alexander-Arnold inside out to roll across.

Within moments of the restart, Napoli had their fourth, as Alisson made the save from point-blank range on Zielinski, who dinked the rebound over him.

Liverpool scored their first ever goal on Neapolitan soil in their fourth visit, as Luis Diaz cut inside Anguissa and curled into the far bottom corner.

It still wasn’t over, as Luis Diaz’s bullet header was palmed out from under the bar by Meret and Alessio Zerbi went for goal when he should’ve passed.