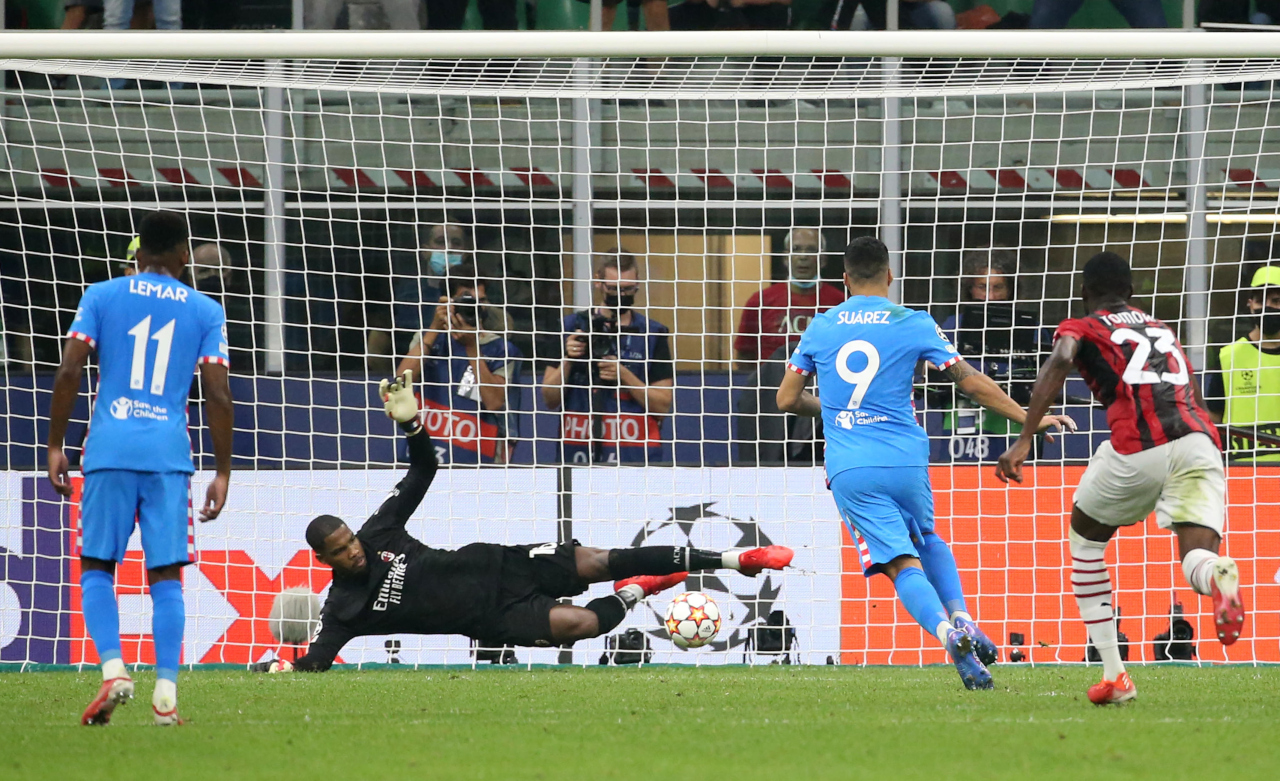 Milan were left furious with the referee after Franck Kessie’s red card just 29 minutes in, as Antoine Griezmann and a stoppage-time Luis Suarez penalty completed the Atletico Madrid comeback.

The Rossoneri lost their opener 3-2 at Liverpool, while the Spaniards were held 0-0 at home by FC Porto. Zlatan Ibrahimovic, Simon Kjaer, Rade Krunic and Tiemoue Bakayoko were injured, Pietro Pellegri not on the UEFA list, while Olivier Giroud and Sandro Tonali were not 100 per cent fit. Atleti missed Stefan Savic, but benched Rodrigo De Paul and Antoine Griezmann for a rather defensive line-up.

The atmosphere was spectacular in their first Champions League home game for seven years, even if the attendance was limited to 50 per cent capacity by COVID restrictions.

It was a very aggressive start from the hosts and Ante Rebic really should’ve scored when springing the offside trap, but Jan Oblak made a desperate save one-on-one to deflect it inches wide.

On the resulting corner, Brahim Diaz laid it off for Rafael Leao just inside the box, he took a touch and swept it into the far bottom corner.

Milan were dominating the game, but the referee flashed a very harsh second yellow card to Franck Kessie, reducing them to 10 men before the half-hour mark. Rebic was booked for his protests and clearly irritable, so made way for Sandro Tonali.

Nonetheless, Leao almost got a spectacular second with a bicycle-kick off the crossbar, but the flag was also raised for an extremely tight offside that may well have required VAR if it had gone in.

Atleti made an attacking change, with Joao Felix for Kieran Trippier, and had a huge chance on the stroke of half-time when Luis Suarez volleyed just wide from nine yards.

The Spaniards continued to pour forward, Suarez nodding wide and Joao Felix seeing a shot charged down, but no efforts on target until Lemar’s long-range strike was beaten away by Mike Maignan on 76 minutes.

Milan’s players looked utterly exhausted, working their socks off down to 10 men for an hour. Somewhat inevitably, Atleti found their equaliser when Renan Lodi nodded it back and Antoine Griezmann hit it on the volley from 12 yards, getting in front of Alessio Romagnoli.

It wasn’t over yet, as Alessandro Florenzi’s ferocious volley flashed wide and another long-range strike landed on the roof of the net. Maignan got his gloves to a long-range Joao Felix effort, but deep into stoppages the referee pointed to the spot for Pierre Kalulu’s handball, from point-blank range on Lemar.

Luis Suarez rolled the penalty down the middle, surprising Maignan to give Atletico Madrid the latest of last-gasp wins and break Milan’s hearts.