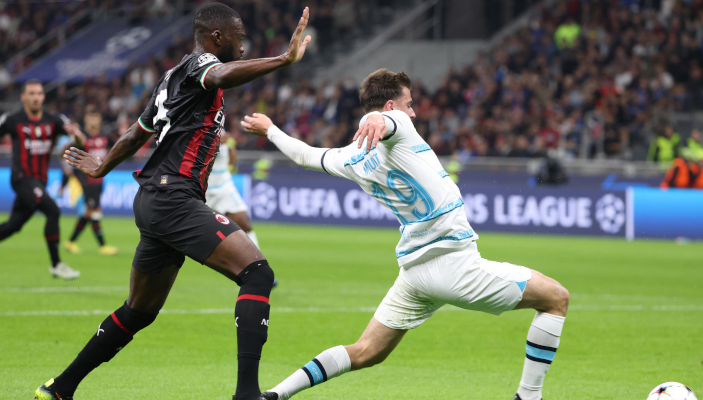 Milan never got the chance to get started against Chelsea, as the harsh red card and penalty for Fikayo Tomori after 18 minutes transformed the game.

All is not lost, as the group remains extremely tight with Chelsea top on seven points, RB Salzburg six, Milan and Dinamo Zagreb four.

Milan had started very aggressively and attacking, but the game changed on 18 minutes when Fikayo Tomori was incredibly harshly shown a straight red card and a penalty awarded for a tiny tug on Mason Mount’s shoulder. It was considered a clear scoring opportunity and VAR did not intervene, as the referee was in a position to judge the situation. Jorginho converted with his traditional hop, skip and jump penalty style.

Olivier Giroud really should’ve equalised for the 10-man Rossoneri on 27 minutes, but his free header was wide from eight yards on a Brahim Diaz cross.

Instead, Chelsea doubled their lead when Mount’s slide-rule pass released Pierre-Emerick Aubameyang to tap in at the back post.

Brahim Diaz was replaced by Sergino Dest to shore up the defence and another Giroud header went over the bar from a corner, while Ciprian Tatarusanu got down to palm away the Mount strike.

After the restart, Kepa Arrizabalaga stuck out a foot to parry Sandro Tonali’s pull-back and Thiago Silva made a decisive block on Giroud for the rebound, then Connor Gallagher went around Tatarusanu only to hit the side-netting.

Sergino Dest blasted over from a very promising position after Rafael Leao’s cross, while Kalidou Koulibaly made a decisive block when Leao ran away from Trevoh Chalobah.