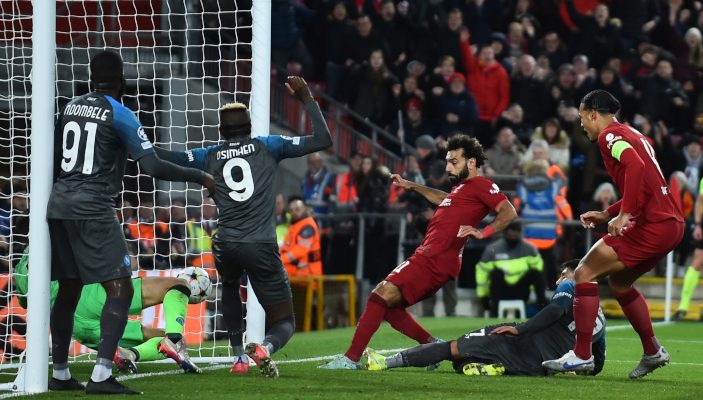 Napoli lost their perfect record and run of 13 consecutive victories in all competition, but still win the Champions League group after a 2-0 defeat at Liverpool dominated by very tight VAR calls.

Both teams had already booked their place in the Round of 16, with the Partenopei guaranteed top spot unless losing here by four clear goals. Amir Rrahmani was the only absentee, with the hosts missing Luis Diaz, Diogo Jota, Joel Matip and Juventus loanee Arthur Melo.

Curtis Jones turned over from a tight angle after an inspired Mohamed Salah slide-rule pass, while Kvicha Kvaratskhelia had penalty appeals rejected for a nudge in the back from Konate.

Tanguy Ndombele saw his shot smothered and on the counter from that move Thiago Alcantara stung Alex Meret’s gloves, while Jones nodded over from a cheeky Bobby Firmino aerial back-heel flick.

Meret did so well to stay on his feet and get a touch to the Salah shot one-on-one, though the former Roma man was offside anyway.

James Milner went off within seconds of the restart, as he felt dizzy from an earlier clash of heads with Andre-Frank Zambo Anguissa that left him with a cut to the forehead.

Napoli thought they had taken the lead on 53 minutes when Leo Ostigard met a Kvaratskhelia free kick with his diving header. However, after a delay of over three minutes, VAR eventually ruled it offside by millimetres.

Kvaratskhelia’s volley took a slight deflection off Trent Alexander-Arnold to allow Alisson to smother, then the Georgian blasted over after cutting back past two.

Instead, Liverpool broke the deadlock with a chaotic move, as Darwin Nunez came off the bench and saw his bullet header on a Tsimikas corner parried by Meret on the line before Salah made sure.

Salah would’ve had a second in stoppages, but Ostigard got back for a decisive interception to stop him tapping in the Nunez ball across the face of goal.

There was another very lengthy VAR wait when the Virgil van Dijk header on a corner was saved by Meret on the line and Darwin Nunez turned in the rebound from point-blank range. This time, however, VAR ruled that Piotr Zielinski was keeping him onside and so the final score was 2-0.