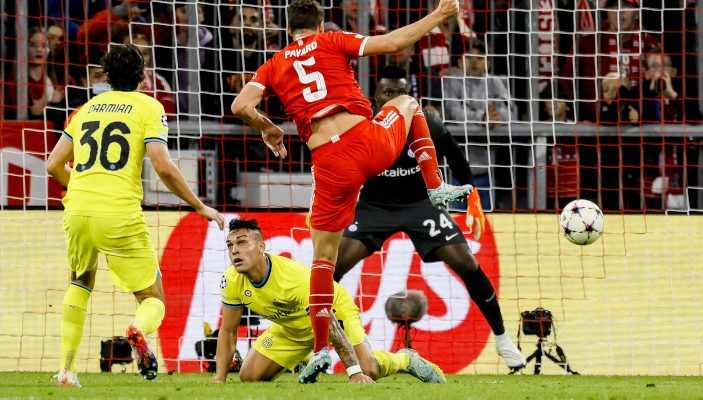 Inter rotated their squad and still had a very strong first half, including a big penalty appeal, before capitulating to Bayern Munich.

The result of this fixture was irrelevant, as the Germans already guaranteed top spot with the Nerazzurri qualified for the Round of 16, sending Barcelona into the Europa League, so it was an opportunity for both sides to rest players. Romelu Lukaku, Marcelo Brozovic and Danilo D’Ambrosio didn’t make the trip, while the hosts missed Manuel Neuer, Thomas Muller, Lucas Hernandez, Bouna Sarr, Leroy Sané and ex-Juventus defender Matthijs de Ligt.

Inter had the first real chances, corners cleared as far as Nicolò Barella, but the first shot was well saved, the second charged down by Sadio Mane’s hands. However, after a VAR review, the referee opted not to give a penalty because Mane had his hands directly in front of his face and did not – in the official’s view – make himself bigger.

Inter wasted an extraordinary chance to take the lead on 27 minutes, as Robin Gosens rolled across the face of goal for Lautaro Martinez to come sliding in and somehow turn over from six yards.

Bayern Munich took the lead somewhat against the run of play, as Benjamin Pavard was allowed a free header on a Joshua Kimmich corner, where he was meant to be marked by Lautaro Martinez.

Andre Onana plucked a Mane curler out of the air, but Gosens was booked for taking down Kinglsey Coman after a slip when playing out from the back.

Onana also parried a Coman snapshot that bounced right in front of him in first half stoppages.

Inter had the ball in the net straight after the restart, but Francesco Acerbi was offside when nodding in the free kick over the top.

Kimmich drilled wide and Roberto Gagliardini’s finish was too weak to trouble the goalkeeper, while Eric Maxim Choupo-Moting was offside when turning an acrobatic effort in from close range.

However, Choupo-Moting did get his goal with an absolute rocket from outside the box into the near top corner.

Edin Dzeko nodded a Hakan Calhanoglu free kick over and forced a save deep into stoppages.