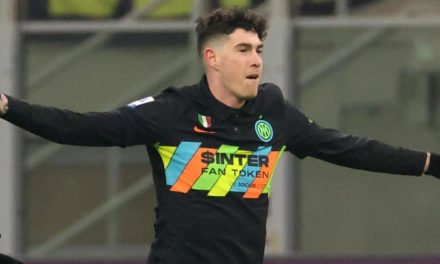 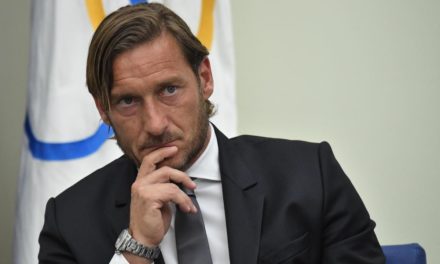 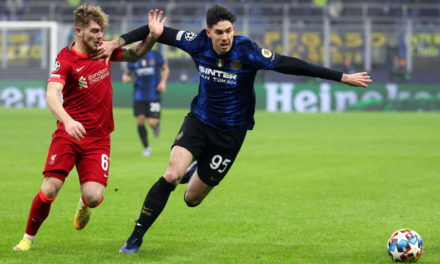 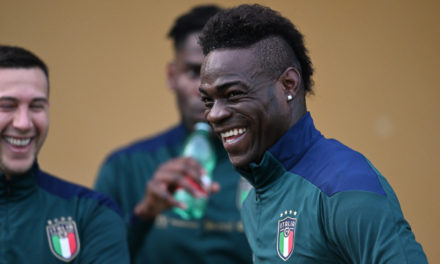 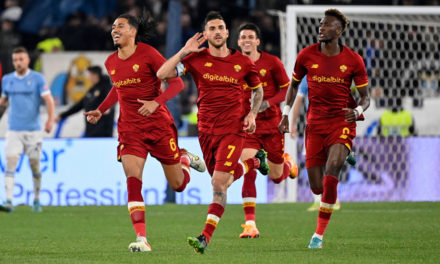 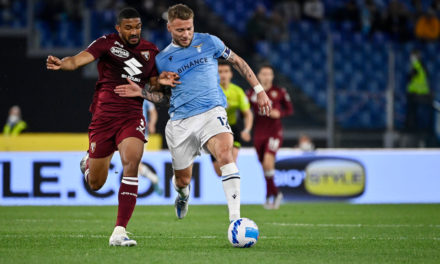 Bremer will become eligible to play for ... 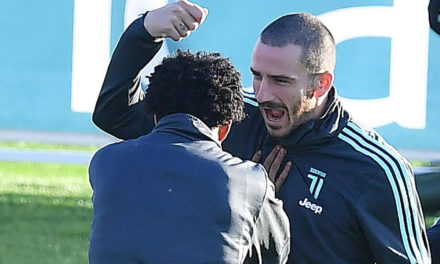 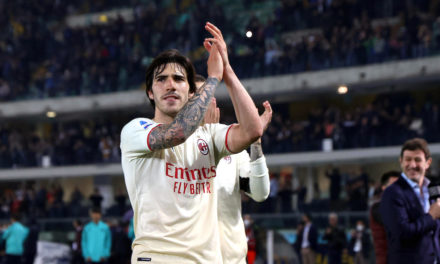 Roberto Mancini has named the Italy squad for the June Finalissima against Argentina and four...

Immobile out of Finalissima and Italy’s Nations League clashes

Ciro Immobile is reportedly going to be out of action for a month, meaning the Lazio striker will...

Italy manager pointed people into the direction of the FIFA ranking when asked about a potential...

Immobile: the goal king of Serie A

Ciro Immobile was once again the king of goals in Serie A, becoming the first Italian striker to...

Italy forward Mario Balotelli scored a sensational Rabona goal as one of the five times he found...

FIGC president Gravina: ‘I’ll ask Chiellini to work with me’

FIGC president Gabriele Gravina revealed that he plans to offer Giorgio Chiellini a job soon. The...

The Argentina squad has been confirmed for the Finalissima clash with Italy at Wembley Stadium,...

Italy coach Roberto Mancini has called up 53 players for a training camp from May 24-26, including...

Roberto Mancini highlighted the lack of change within Italian football across the last four years...

Serie A’s plan to host a tournament in America during the upcoming World Cup in Qatar have been...

Italy at the World Cup

Italy at the European Championship

The Italy national side are known as the Azzurri on account of the colour of their shirts, and one of the most decorated countries in international football. The Azzurri have carved out a long and rich history since their first official match in 1910 when Pietro Lana scored their first ever goal in a 6-2 victory over France, and you can stay on top of all the latest Italy news and views right here at Football Italia.
As one of the world’s most famous national teams, it goes without saying that the latest Azzurri news is always closely followed and hotly debated. Whether Italy are creating headlines by winning tournaments such as Euro 2020, or thinking about replacing their manager, you can stay bang up to date right here. Football Italia is the number one English-speaking resource for everything related to the Italy national team, while you can also follow our Twitter account to get all the breaking Italy news direct to your mobile device.
From World Cup qualification to the Nations League, European Championship and international friendlies, you can keep track of all the latest Italy fixtures here. Whether you’re checking the kick-off time on the day of a match or looking ahead to pick out the biggest Italy fixtures coming up to put in your calendar, we’ll help you keep your finger on the pulse.
From their triumphant Euro 2020 campaign to the record-breaking unbeaten run, Italy results are always of huge interest. We have live in-game coverage of every Azzurri match, so you can keep track of the latest Italy score while the players are on the pitch. Then, you can read all about each game as we analyse the latest Italy results through our in-depth reaction that includes player comments, manager press conferences and the best of social media.
After Italy declined their invitation to join the inaugural World Cup in 1930, the Azzurri would emerge triumphant on their tournament debut four years later. Enjoying home advantage during the competition, Italy dramatically beat Czechoslovakia 2-1 in extra time in the final, with Angelo Schiavio scoring the winning goal for his country.

The Azzurri made a successful defence of their title at the 1938 World Cup in France, this time seeing off Hungary 4-2 in the final courtesy of braces from both Gino Colaussi and Silvio Piola. Few would’ve guessed at that point that the Italians would have to wait 44 years to be crowned champions of the world for the third time in their history.

Italy finished as runners-up to a great Brazil side in 1970, with the final deciding which team would claim the Jules Rimet Trophy on a permanent basis by winning the World Cup for a third time. Twelve years later, the Azzurri went one better to finally complete the hat-trick for themselves, with their 3-1 victory over West Germany in the final becoming famous for Marco Tardelli’s iconic celebration after putting Italy 2-0 up.

There was searing heartbreak for Italy at USA 94, when they made it all the way to the final only to lose to Brazil once again. With the score still goalless after extra time, Roberto Baggio skied the decisive penalty in the shootout, denying Il Divin Codino - the Divine Ponytail - and his team the ultimate glory.

Redemption for the nation would again come 12 years after losing a final. The 2006 World Cup final once again went to penalties, but this time Italy banished their demons to beat France and lift their fourth world title. The game was marred by the notorious incident involving Marco Materazzi and French legend Zinedine Zidane, who was sent off in the final minutes of his career for head-butting the Italian defender.

The world’s grandest stage has proved slim pickings in the years since for the Azzurri. They were eliminated in the group stage in both 2010 and 2014, before suffering one of the most humiliating embarrassments in their history by failing to qualify for the 2018 World Cup in Russia. That was the first time they’d failed to reach the summer showpiece in 60 years, although Italy will head to the 2022 World Cup in Qatar as one of the pre-tournament favourites.
Italy’s status as one of the favourites to win the World Cup in 2022 is due to their triumph at Euro 2020. The rearranged European Championship took place in the summer of 2021 due to the coronavirus pandemic, as Italy went all the way to lift their second continental title. The Azzurri beat hosts England at Wembley in the final, triumphing on penalties after the scores were locked at 1-1 at the end of extra time.

That was Italy's first European Championship success since their maiden victory back in 1968. Interestingly, in the days before penalty shootouts, the Azzurri won a coin toss to get past the Soviet Union in the semi-finals, before beating Yugoslavia 2-0 in a replay in the final, following a 1-1 draw at the end of extra time in the first game.

It would take 32 years for Italy to get back to the Euro final, losing to France on an extra time golden goal in 2000. The Azzurri also finished as runners-up at Euro 2012, where they were beaten 4-0 by an all-conquering Spain side in the final, before eventually lifting the trophy again in 2021.
Italy is a nation that’s been blessed with some of the finest players to ever grace the game. From world-class defenders such as Franco Baresi, Paolo Maldini and Fabio Cannavaro to a couple of the best goalkeepers in history in Dino Zoff and Gianluigi Buffon, the iconic blue shirt has also been donned by some of the greatest attacking talent football has ever seen.

Milan giant Giuseppe Meazza is regarded by many as the greatest Italian player of all time, scoring 33 goals in 53 appearances between 1930 and 1939. Others would argue Roberto Baggio’s case, with Il Divin Codino representing both a host of clubs and his country with distinction across a storied career. From Luigi Riva, Silvio Piola and Paolo Rossi to Alessandro Del Piero, Christian Vieri and Francesco Totti, picking an all-time Italy XI is almost impossible.
As well as irrepressible talents on the pitch, Italy have also had some of the game’s greatest minds directing their players from the dugout. The legendary Fulvio Bernardini represented Lazio, Inter, Roma and Italy during his playing career before winning Serie A with unfancied Fiorentina in 1956 and Bologna in 1994 and finishing his career as Azzurri boss in 1975.

The man who succeeded Bernardini, Enzo Bearzot, would lead the Azzurri to their third World Cup in 1982. He still holds the record for the most matches as Italy CT, taking charge of 104 games between 1975 and 1986. Before that, Vittorio Pozzo guided Italy to their first two World Cup crowns. Enjoying notoriety for his advanced tactical innovations, Pozzo developed the 2-3-2-3 Metodo formation, which is very similar to the setup favoured by Pep Guardiola.

The revolutionary Arrigo Sacchi is also famous for his tactical innovation. He led Milan to the Serie A title in 1988, before capturing back-to-back European Cups in the two following campaigns and then taking the Azzurri to the World Cup final in 1994. Giovanni Trapattoni won a plethora of trophies in different countries, including seven Serie A titles with Juventus and Inter, as well as the European Cup with the former and the league title in Germany, Portugal and Austria. He was however unable to land any silverware when in charge of Italy between 2000 and 2004.

The same cannot be said of Ferruccio Valcareggi, whose eight-year spell as CT yielded Italy’s 1968 European Championship triumph. Valcareggi would also take the Azzurri to the World Cup final two years later, where they were beaten by one of the greatest teams to ever play the game, the Brazil 1970 World Cup-winning side. Marcelo Lippi, on the other hand, was able to take the final step to glory as Italy coach. He lifted the World Cup trophy aloft in 2006, as the Azzurri beat the odds to overcome France in the final.
Gianluigi Buffon holds the record for the most Italy caps, with the goalkeeper turning out for his country on 176 occasions between 1997 and 2018. Fabio Cannavaro is behind Buffon in second place with 40 fewer caps, while Paolo Maldini is another 10 back. Of the current Azzurri crop, veteran centre-backs Giorgio Chiellini and Leonardo Bonucci were both tied on 114 appearances at the end of 2021. Daniele De Rossi, Andrea Pirlo and Dino Zoff are the only other players who’ve managed to reach a century of caps for Italy so far.

The great Gigi Riva, who earned 42 Azzurri caps between 1965 and 1974, remains Italy’s record scorer with 35 goals. Giuseppe Meazza comes next with 33, before Silvio Piola with 30. Revered trequartistas Roberto Baggio and Alessandro Del Piero both hit the back of the net 27 times in blue, while Filippo Inzaghi (25) and Christian Vieri (23) are the only other players in the current top 10 who plied their trade in the 21st century.

Other individual record holders include Paolo Maldini as the country’s leading appearance-maker at the World Cup (23), Gianluigi Buffon as the only man to be named in five World Cup squads, and Leonardo Bonucci with the most appearances at the European Championship (18). Dino Zoff is the oldest man to have played for Italy at 41 years and 89 days in 1983, while Renzo De Vecchi’s appearance back in 1910 at the age of 16 years and 112 days remains the youngest.

In 2021, Italy set a new record in international football when they went 37 games unbeaten. The run included their triumphant Euro 2020 campaign and began in October 2018, before the Azzurri finally went down 2-1 to Spain in the Nations League some three years later.

How many times have Italy won the World Cup?

Italy have won the World Cup four times. They won the tournament on their first attempt in 1934, before successfully defending their crown four years later. The Azzurri also lifted the World Cup in 1982 and 2006.


How many times have Italy won the European Championship?

Italy have won the European Championship twice. The Azzurri won the tournament for the first time in 1968, before winning the rearranged Euro 2020 in 2021, beating England on penalties in the final at Wembley.


Who is the Italy coach?

The current Italy coach is Roberto Mancini. The former Fiorentina, Lazio, Inter, Manchester City, Galatasaray and Zenit St Petersburg boss led the Azzurri to their Euro 2020 triumph in the summer of 2021.


Who is Italy’s record scorer?

Italy’s record goalscorer is Luigi Riva, who netted 35 times in 42 appearances between 1965 and 1974. Riva also holds the record for the most Azzurri hat-tricks (three).