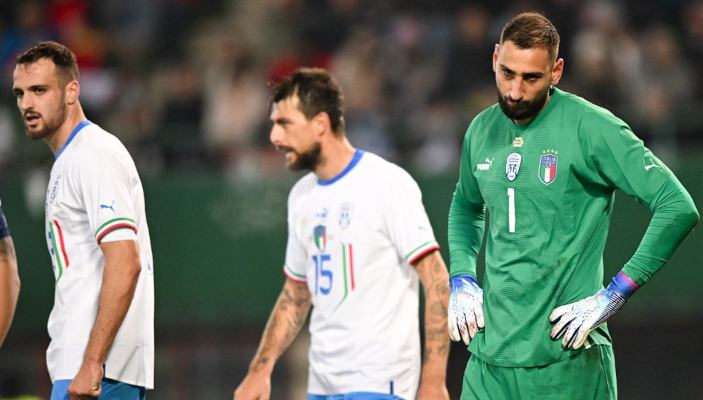 Italy ended 2022 with a disappointing friendly defeat in Austria, beaten by Xaver Schlager and David Alaba goals, only really waking up once Federico Chiesa and Nicolò Zaniolo came on.

The Azzurri played their final match of 2022 in Vienna, just hours after the World Cup kicked off in Qatar. Sandro Tonali had pulled out after an injury in the 3-1 win away to Albania, Roberto Mancini continuing to experiment with the 3-4-3 formation and making five changes from the starting XI in Tirana.

In the opening minute, David Alaba risked an own goal in his desperate interception of Federico Dimarco’s roll across for Giacomo Raspadori.

However, Austria took the lead when Xaver Schlager robbed Marco Verratti in midfield – according to the PSG man with a foul – and scored on the Marko Arnautovic assist. There was no VAR in this friendly match, so the protests were unheeded.

It was nearly 2-0 moments later, this time Nicolò Barella lost it in midfield and Nicolas Seiwald sent Francesco Acerbi to ground before clipping the top of the crossbar. On the resulting corner, Gianluigi Donnarumma smothered the Junior Adamu back-heel flick.

Just like the midweek victory in Albania, Italy had conceded an early goal, but risked more with Arnautovic blazing past Federico Gatti to twice set up Adamu, who failed to finish.

Adamu also didn’t make the most of an Acerbi howler when kicking the clearance straight at him from 12 yards, only hitting the upright.

Austria did double their lead with a ferocious missile of a long-range free kick from Alaba that was blasted in off the underside of the crossbar.

Donnarumma was ready for the save moments later, getting his fingertips to a Marcel Sabitzer strike, while Matteo Politano forced the first real save at the near post.

Donnarumma still had his gloves stung by Arnautovic and made a fantastic reaction save on the Stefan Posch header at the back post.

Zaniolo volleyed a Federico Dimarco cross over the bar and Alaba made an unorthodox interception to stop Raspadori going clear, while Chiesa curled wide of the far post.

Raspadori had a great chance when hooking a Verratti ball over the top to shoot from six yards, denied only by Lidnner sticking out a leg to deflect it wide.

Zaniolo went on a strong run down the left and pulled back for Chiesa to skim the crossbar first time from 12 yards.

A cross was flapped off the head of Leonardo Bonucci and the defender just failed to reach a deflected Matteo Pessina strike at the back post.