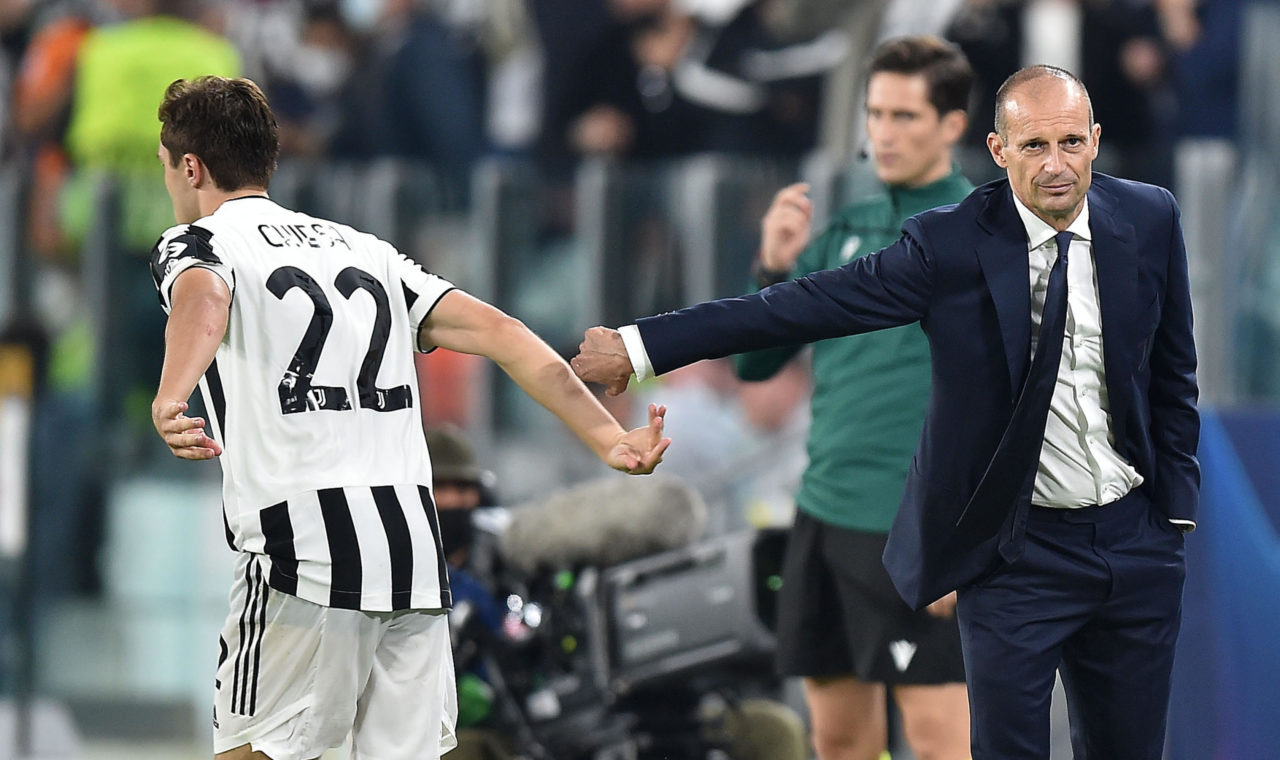 Juventus beat Chelsea with a solid performance at the Allianz Stadium, picking an opposite game plan to the one Pep Guardiola had used to win against the Blues, writes Lorenzo Bettoni in Turin.

Juventus fans felt it could have been one of those nights. Despite a slow start to the season, many Bianconeri supporters outside the Stadium were optimistic about a good result against Chelsea, the Champions of Europe. Even without their best scorers Paulo Dybala and Alvaro Morata, who were out of action with injuries, the Bianconeri’s expectations were high and many were curious to know how Massimiliano Allegri would have replaced the pair.

“I have confused ideas,” he had said on the eve of the game. It turned out he was very much clear-minded.

The Tuscan tactician picked Federico Bernardeschi as a false 9 with Moise Kean, Juventus’ only striker available, starting on the bench. He was joined by captain Giorgio Chiellini, who saw Matthijs de Ligt and Leonardo Bonucci start at the back. The defensive pair had to deal with a familiar face in Romelu Lukaku, the former Inter striker who has now one goal in seven appearances against the Old Lady.

Before the match, in an interview with The Athletic, Bonucci had claimed: “In the box, he [Lukaku] is great at playing man-to-man so you need to be on the front foot, try to read the game and play hard.” That’s exactly what he did. Lukaku had only one big chance which he awkwardly missed in the second half.

Juventus fans knew he was the biggest threat for their side and kept booing him for the whole game, not always shouting nice things at him. Unfortunately, that’s part of the game, especially in Italy, which the Belgian learned by experience, particularly in the Milan derby.

Earlier last week, Chelsea had lost 1-0 at Stamford Bridge against Pep Guardiola’s Manchester City, who had used an intensive pressing to prevent the Blues from registering any shot on target.

Tonight, they only had one, even if Juventus used a totally different approach. Allegri’s men sat deep, waited for Chelsea and tried to hit on the counter. During the first half, they had two massive chances, the second half began with Federico Chiesa’s goal. Arguably Juve’s best player of the night, along with Leonardo Bonucci.

The former Fiorentina star was lethal with his transitions. In the first half, he could have passed the ball to Bernardeschi who would have gone one vs. one with Eduard Mendy. On the other hand, after just 11 seconds in the second half, the Carrara-born winger saw Chiesa’s movement and set the No.22 for the winner.

From that moment onwards, Juventus parked the bus. Perhaps, Allegri had no alternatives. Most likely, this would have been his game plan even with Dybala and Morata. Surely, the Bianconeri were not used to these kinds of performances over the last two seasons. Their grinta and solidity seemed gone when Maurizio Sarri and Andrea Pirlo were appointed. The Serie A giants wanted to get a new identity. A new playing style, made of high pressing and quick ball recovery. Opposite from the one that had brought 11 trophies over the previous five years with Allegri in charge.

During their pre-match press conferences, Allegri and Chiellini had stressed that Juventus needed to recover that ‘joy to defend’ inside the box. Based on tonight, they made a little step forward in that direction. “I had the feeling the team was calm in defending,” Allegri said in his post-match press conference tonight. He was right, as Chelsea gave the impression they wouldn’t be able to score even if they had played all day.

“It’s been a few weeks that we’ve been looking for the attitude we had lost over the last few years, that desire to be tough on every ball,” added Bonucci.

“Sometimes we should be more precise technically, but these performances must be the rule and not the exception.”

Despite sitting deep, the Serie A giants had the best chances of the night, two in the first half and two in the second half. Chelsea registered only one shot on target.

With six points in two games, Juventus are the Group H leaders and the qualification for the Round of 16 is in their hands. Perhaps they are not developing the same way as Italian football, going in the opposite direction to Roberto Mancini’s UEFA EURO 2020 winners, but the Bianconeri are surely finding their old identity, which ultimately is the reason why Allegri was brought back.

13 Comments on “Allegri is the anti-Guardiola, but both approaches defuse Chelsea”