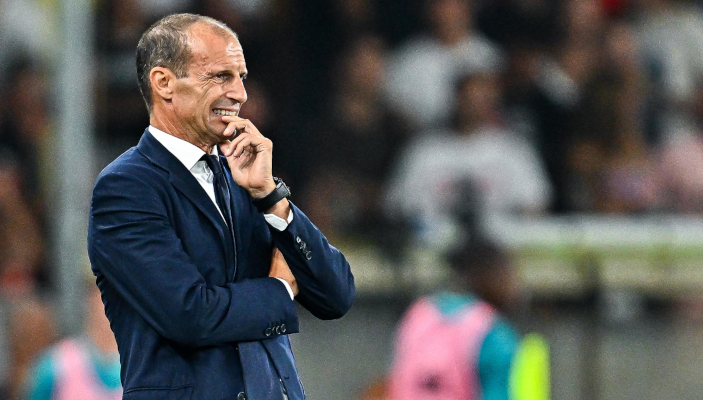 Massimiliano Allegri analysed Juventus’ rough form, their injury crisis and his tactical decisions after a tough start to the season.

The Bianconeri have not started the 2022-23 campaign well, losing both of their opening Champions League group games to Paris Saint-Germain and Benfica, and sitting 8th in the Serie A table after their first six matches. Many fans are calling for Allegri to be dismissed, but his high salary and long contract makes this unlikely for the time being.

Speaking to Corriere della Sera, Allegri first discussed his disappointment at the team’s recent form and their problematic injury crisis.

“I’m very sorry for this situation and I often ask myself if I have made mistakes. The first answer that comes to mind is that Juve had been thought of in another way. With Rabiot-Paredes-Pogba in midfield plus Locatelli as the first substitute.

“Di Maria and Chiesa on the wings, Vlahovic in the middle. The Juve of now is virtual. I know we lack someone who can invent in the last thirty metres, but we signed Pogba and Di Maria for this. And we are developing Miretti, the most suitable in that role among those there.

“But he’s not Pogba. He’s only 19. We have problems pushing on the wings. I can no longer ask players who have been running all their lives to continue doing so up the whole wing.

“If I ask Cuadrado to be a winger, he can still do it very well. But I can no longer ask him to always do two roles.”

He touched on the mentality issue in the squad.

“Something is missing. We’re stopping soon. That’s my job, we’re working on it every day. Many mistakes, however, are technical.”

The Bianconeri coach commented on the returns of Federico Chiesa and Paul Pogba.

“We’ll be able to count on Chiesa and Pogba in January, then we’ll see what we can ask for immediately. They’re not bikes.”

He spoke about how the injuries have seriously limited his options.

“There are objective difficulties, I know that, I haven’t coached for just a day and I’ve always made little mistakes. But I repeat, this is a virtual Juventus now.

“I’m happy with the work in the market, I liked it. But the players on the pitch are not there. Try taking five starters away from Inter or Milan.”

Allegri attempted to explain his tactical decisions and he looked around at the other top clubs in Europe.

“I watched with interest on Sky Carlo Ancelotti’s interview with Paolo Condò. He said that after losing the first two games, he asked the team to drop twenty metres and wait for Shakhtar. Real, you see? They won 5-0.

“PSG were losing 1-0 in Israel, then Messi, Mbappe and Neymar scored, not just anyone. Quality always lies in the players, not in the tactics. A good coach has to think about the players first. I now have half a starting team out. Exactly half a team.

“After Benfica I stopped to talk to Rui Costa, I wouldn’t stop. He told me that today football is upside down, if a player makes a good pass he is already a phenomenon. If he makes a forty-metre pass, double phenomenon. But in football it must be normal to pass the ball well, to know how to launch it.

“Today people mistake the rule for the exception. It cannot be like that. I adore the quality of my players, I sought them out and wanted them. I don’t have pre-established tactics, I adapt the game to their qualities. I’m not a phenomenon because of that, it’s my job. The player is made up of details that must always be considered.

“For example, there is no one way to stop the ball. There are two. If you stop it at the back it’s a defensive stop, if you can do it at the front it starts an attacking action. This is real, applied football. Like passing, it’s not enough to give the ball to a team-mate in the area, you have to give it to him with counted turns otherwise he won’t shoot on goal, he has to turn first.

“Today the players don’t think, they obey. They don’t interpret. It’s the easiest solution. Whereas football is a sum of individual fantasies. With Benfica Di Maria came in a few minutes and put one in front of the goal from thirty metres.

“Can I say it was a play? No, it was Di Maria. I have these players, if we are all there, we are strong. Today I don’t even know which team we’ll go to Monza with, it’s a game we just have to win. But I have two others who are injured and I have no more substitutions. I look forward to the break, afterwards I’ll at least be able to recover three players.”

He commented on some of the individuals in his Juventus squad.

“I can say that Bremer is very strong. I expected a lot from Milik and a lot is coming. Do you know why? Because Milik plays good football anyway, he always misses the least.

“He knows how to move. I miss Rabiot a lot today. A lot of people discuss him, but Rabiot does 13-14 good things per game and he always weighs in on the pitch. Let’s go back to the point of before, Rabiot has technique and physique.”

Finally, Allegri looked ahead to Juventus’ future and what needs to be done.

“We have to win in Lisbon, beat Haifa twice and see if that’s enough. In the league, Inter are the strongest, even if they lack Perisic. They’ve strengthened a lot in midfield with Mkhitaryan and Asllani, who is good.

“Milan has two exceptional and very modern players, Theo Hernandez and Leao. It comes back to the importance of physicality. There is no one else in the world who jumps the man with the power and lightness of Leao.

“When we are all there, we’re also very strong. But we will talk about it again, hopefully soon.”

7 Comments on “Allegri: ‘I often ask if I’ve made mistakes, half of Juventus is unavailable’”